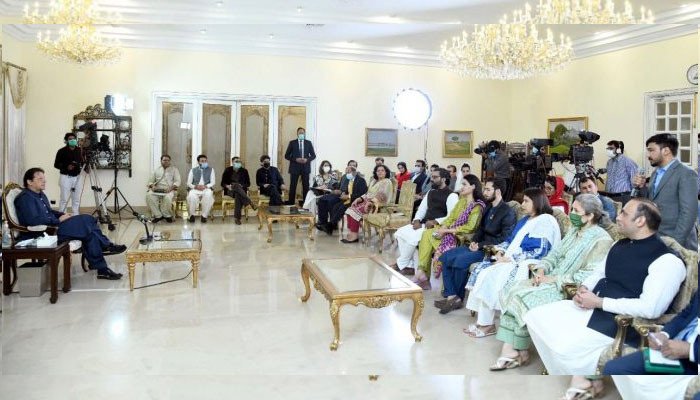 Speaking at a Pak-Afghan Youth Forum Prime Minister Imran Khan said on Wednesday that peace in Afghanistan will allow Pakistan access to the Central Asian Republics.

He also answered questions asked by the delegation at the forum. He said that all future economic policies of Pakistan are dependent upon peace in Afghanistan as a precursor. Pakistanis consider the people in Afghanistan their brothers.

When talking about Indian involvement in Afghan peace process, the prime minister said that Pakistan will not hold any talks with its hostile neighbour until the August 5, 2019 action is reversed.

Taking the stern position, he added that the status of the Occupied Kashmir must be restored under which Kashmiris had the right of self-determination as per UN Resolutions.

The recent statements from Afghan leaders blaming Pakistan for the Afghan crisis is unfortunate, the PM Imran Khan said, adding that it is Pakistan that has strived hard to convince the Taliban first for talks with the United States and then with the Afghan government.

To another such query, the Prime Minister said unfortunately there was a misconception in Afghanistan, based on Indian propaganda, that Pakistan was controlled by military institutions.

The Prime Minister Imran Khan said Pakistan has always desired peace with its neighbours but it was India that did not want peace because it was at present under the influence of RSS ideology.

Earlier yesterday in an interview with a US media outlet, PM Imran Khan said Pakistan is a partner in peace and cannot become a part of the dispute. He categorically said that there is no military solution to the Afghan issue.

Pakistan played a key role as a facilitator to bring the Taliban and the United States to the negotiating table, he said in the interview.