US ‘really messed it up’ in Afghanistan 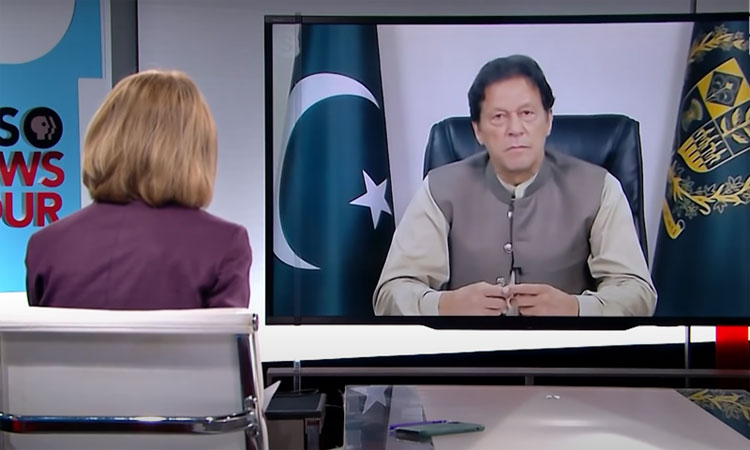 Prime Minister Imran Khan has said that the United States ‘really messed it up in Afghanistan’ as he questioned the American motive of Afghan invasion in the first place and then their subsequent attempts of seeking a political solution with the Taliban from a position of weakness.

The prime minister said the US should have opted for a political settlement much earlier, when there were as many as 150,000 Nato troops in Afghanistan. “But once they had reduced the troops to barely 10,000, and then, when they gave an exit date, the Taliban thought they had won. And so, therefore, it was very difficult for now to get them to compromise,” he told programme host Judy Woodruff .

The prime minister asked for evidence of where Afghan Taliban sanctuaries are located in Pakistan, referring to claims of Taliban sanctuaries being present in Pakistan and a report about 10,000 fighters crossing the border to help the group in Afghanistan. “Judy, for a start, this 10,000 Taliban, or as the Afghan govt says, Jihadi fighters have crossed over, is absolute nonsense. Why don’t they give us evidence of this?” he asked.

To the question about the safe havens, Imran Khan wondered where the sanctuaries are located in Pakistan. he explained that Pakistan is hosting three million refugees who are Pashtuns, the same ethnic group as the Taliban. He added that there are camps of 500,000 and 100,000 people or more. “Taliban are not some military outfit. They are normal civilians. If there are some civilians in these camps, how is Pakistan supposed to hunt these people down? How can you call them sanctuaries?” he asked.

The premier said that the Al Qaeda was based in Afghanistan and no Pakistani was involved in the attack. “There were no militant Taliban in Pakistan and no Pakistani was involved,” he said, adding that when Pakistan decided to join the US’ war on terror, the country was devastated as it lost 70,000 of its citizens and $150 billion was lost in the economy.

When the interviewer asked whether he thought the Taliban resurgence was a positive development for Afghanistan, the prime minister reiterated that the only good outcome would be a political settlement, “which is inclusive”. “Obviously, Taliban [will be] part of that government,” he added.

The premier described the “worst-case scenario” as being one where Afghanistan descends into a civil war. “From Pakistan’s point of view, that is the worst-case scenario, because we then … we face two scenarios, one [of them being] a refugee problem,” he said. “Already, Pakistan is hosting over three million Afghan refugees. And what we fear is that a protracted civil war would [bring] more refugees. And our economic situation is not such that we can have another influx.”

Prime Minister Imran Khan said that anyone who commits rape is ‘solely’ responsible for the crime, never the victim. “So let’s be clear about that,” he said. “Anyone who commits rape, solely and solely, that person is responsible,” he said. “No matter whatever – how much ever a woman is provocative or whatever she wears, the person who commits rape, he is fully responsible. Never is the victim responsible,” he added in response to a question. “My comments were completely taken out of context,” Imran Khan said, adding that he was simply talking about Pakistan society, wherein there has been a sharp rise in sex crimes. “And sex crime does not include just women. More than rape are child abuse, which is going through the roof.”

His comments were in that context, the prime minister said, pointing out that he used the word purdah. “In Islam,” he added, “purdah does not mean just clothes. And purdah is not restricted to women only, but that is for men as well — It means bringing the temptation down in a society.” “This is what I was talking about – and it was taken out of context – deliberately,” he regretted. “I know all the interviews I have given. Never would I say such a stupid thing where a person who’s raped is responsible somehow – it’s always the rapist that is responsible.”