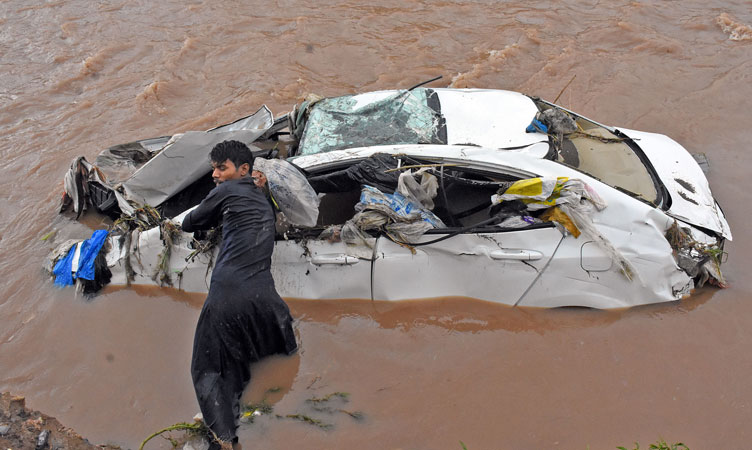 A woman and her son were killed in Islamabad on Wednesday as several areas of the federal capital experienced urban flooding after a cloudburst caused heavy rainfall, a private TV channel reported.

According to the affected family, four children and their mother drowned when a nearby drain overflowed and water entered their house in Islamabad’s Sector E-11. They said that the administration rescued three children while one child and the mother died. An uncle of the deceased child said water entered their house at around 6am due to which a wall in the backyard collapsed. “Water accumulated in the basement of the house, drowning five members of the family, including four kids.” He said they started rescue efforts on their own while the administration reached the area after 8:30am.

Footages circulating on social media showed flood water sweeping away cars in the E-11 area of the capital. Deputy Commissioner Islamabad attributed the flash flood with a cloudburst and urged the public to “cooperate and restrict unnecessary movements”. The deputy commissioner further said the spillways of Rawal Dam were being opened as he appealed to the public to stay away from the riverbanks of Korang and Soan rivers. Additionally, Section 144 (power to issue order absolute at once in urgent cases of nuisance or apprehended danger) was imposed on bathing in rivers, the DC said, adding that rescue and management teams were present to handle the situation.

Videos from Islamabad’s sectors E-11 and D-12 showed cars floating in gushing waters after heavy rains that lashed the federal capital and Rawalpindi for hours Wednesday morning. The twin cities received the highest rains during the current monsoon season. The Pakistan Meteorological Department said that some areas in Islamabad received up to 330mm of rain in the last few hours, which was later confirmed by the CDA.

It said that army troops are busy assisting civil administration in rescue and relief efforts. “Contingency plans are in place to meet any flood situation.”

Prime Minister Imran Khan took notice of the situation and cautioned citizens to take “special care” due to the heavy monsoon rains. “I have also directed all the relevant response agencies including [the] NDMA (National Disaster Management Authority) to be on high alert with ready and rapid emergency response actions.,” he tweeted.

Following the flooding in Islamabad, Punjab Chief Minister Usman Buzdar issued an alert due to the threat of flooding in adjoining city Rawalpindi’s Leh Nullah, and asked Rescue 1122 to “put in place all the arrangements to deal with any emergency-like situation”, reported Radio Pakistan. The state broadcaster further said that the chief minister has asked for a report to be submitted after water drainage in low-lying areas.