Peace in Afghanistan must for development in region: Fawad 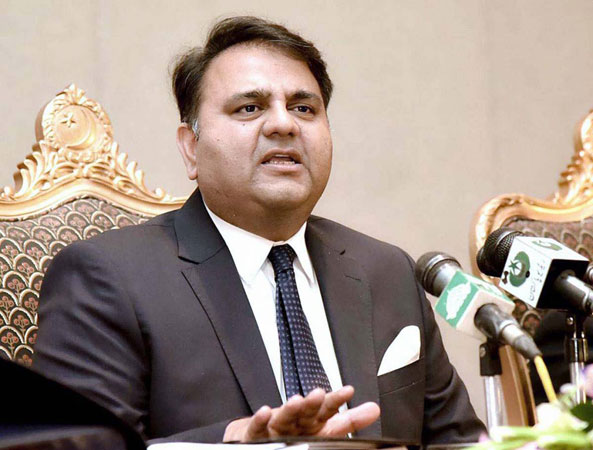 Minister for Information and Broadcasting Chaudhry Fawad Hussain said on Wednesday that Prime Minister Imran Khan’s vision was to link the region with Central Asia and European Union through a peaceful and stable Afghanistan.

For improving economic conditions of the poor segments of the region, political stability of Afghanistan was of paramount importance for achievement of this goal, he said while addressing the inaugural session of the Pak Afghan Media Conclave organised by Pak Afghan Youth Forum here.

He said that Pakistan was desirous of setting up rail link between Gawadar and Tashkent and for this peace in Afghanistan was vital.

He said Pakistan also wanted good relations with India as well as this would help fight poverty in the region.

He said that Pakistan and Afghanistan enjoyed centuries old historical religious, geographical and cultural relations. Despite having seen many ups and downs, the bilateral ties with Afghanistan were stable. However Fawad Hussain opined that some external factors were also behind misunderstanigs between the two brotherly countries.

He said when the erstwhile Soviet Union attacked Afghanistan in 1979, it did not consult Pakistan.

Similarly when Al Qaeda targeted New York twin towers in 2001, it did not consult Pakistan but in both cases Pakistan and Afghanistan and their people had to bear the consequences.

He said that over 5 million Afghan people had to migrate to Pakistan after the Soviet invasion and still over 3 million were living here. The minister said over 6,000 children of Afghan refugees were completing their education from Pakistani universities and colleges and they admit that Pakistan has provided them opportunities.

Fawad said it was Pakistan’s responsibility to provide shelter to Afghan brothers when their country was invaded as these were the teachings of Islam and the Holy Prophet (PMUH).

He said that Pakistan was playing the role of a facilitator in intra- Afghan talks but only Afghan factions and people had to decide about their future.

He said that in Afghanistan there was bloodshed and in Pakistan over 70,000 innocent people lost lives in bomb blasts. He said Pakistan was desirous of peace and stability in Afghanistan on two counts – one was that Afghans were brothers of Pakistanis and and had close family relations, shared same languages and have similar culture and second reason was that Afghanistan’s stability was prerequisite for economic progress of the whole region.

He said Prime Minister Imran Khan believed that no single faction could form a stable government in Kabul, so all factions should sit together and form an inclusive dispensation to ensure peace and progress of the country as well as the entire region. He said all Afghan factions will have to show flexibility as preconditions would not prove helpful in moving forward. He urged the participants of the conclave to give their suggestions for improving bilateral relations.