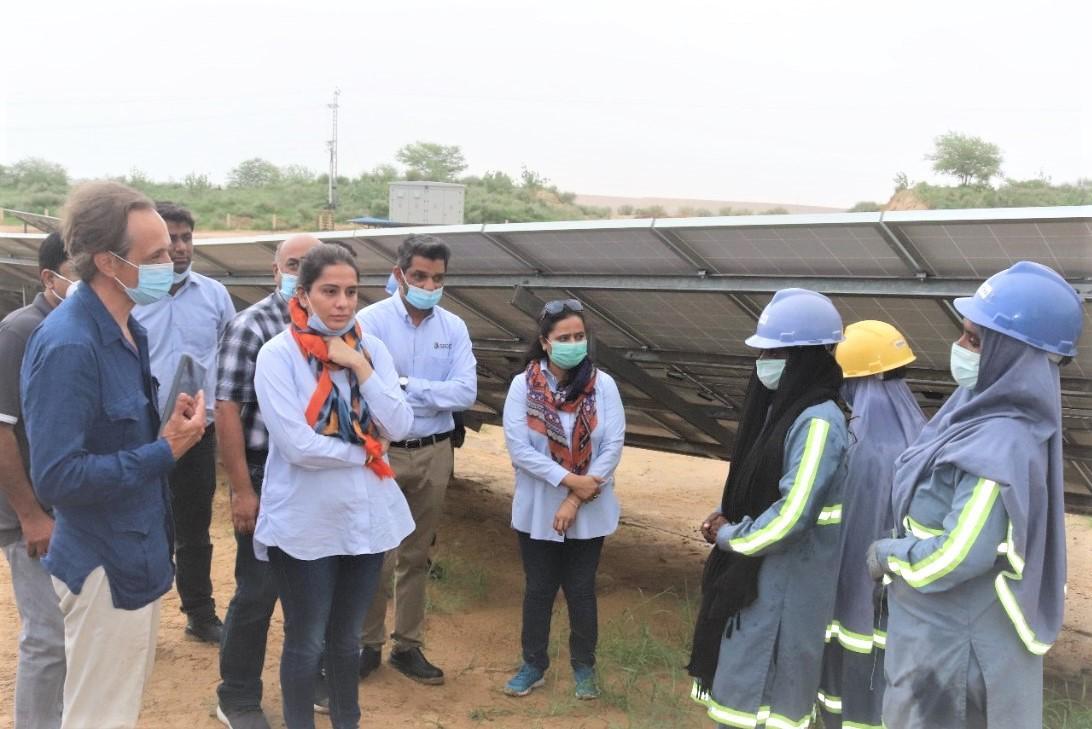 MITHI: Terming it ‘impressive CSR model and a smart way of working with local communities,’ United Nations Resident Coordinator (UNRC) in Pakistan, Mr. Julian Harneis has said that the UN would extend technical support to the Thar Foundation to enhance the impact of CSR work in the area.
After visiting the Thar Foundation interventions in Islamkot taluka, in Tharparkar district, Mr. Julian was of the view that it was a very impressive work to give back to the society and assured that the UN would extend technical support to enhance the impact of TF’s work in Thar.
“Best Corporate Social Responsibility (CSR) model, I have ever seen in Pakistan or anywhere. “This is the model for the public-private partnership which can drive development for Tharparkar and the country” he added.
He said, Thar Foundation’s approach of implementing the SDGs model in Islamkot was a very smart way of working for communities, and it showed how better governance of resources could create an impact.
He said it has been an impressive demonstration of the possibility by government and private sector together to deliver for the development of people in this area.
The UN Pakistan delegation included UNRC Mr. Julian Harneis and UN’s Sindh office Head Mr. Aftab Bhatti and other officials visited Thar Coal Block-II and adjoining communities here on Wednesday. The delegation also visited the Mine Site, Thar Foundation Hospital, Thar Foundation School Islamkot, Biosaline Agriculture Model farms, Thar Million Trees Project, women-run Drinking Water RO plants at Seengaro village, and New Senhri Dars Resettlement Village.
UNRC Mr. Julian appreciated women’s participation at the Block II site and was also very happy with the education and health-related initiatives targeting key SDGs.
During the visit, UNRC also interacted with Women Dump Truck Drivers, Women workers at Reon Solar Power Plant, and women RO plant operators. He asked several questions from women workers about the benefits and challenges of being a working woman in Thar.
Thar Foundation’s Chief Executive Officer (CEO), Syed Abul Fazal Rizvi welcomed the guests and gave a detailed briefing on the overall mining and power generation project followed by a comprehensive presentation on the CSR model of Sindh Engro Coal Mining Company (SECMC) being executed through Thar Foundation.
Rizvi highlighted the support of the government of Sindh and how the SDGs model had been adopted.
He stated that they were pleased to work in cohesion with a target to achieve SDGs in taulka of Islamkot to improve the standard of living for the deprived communities of Thar.
“We remain committed to enhancing our social footprint in Thar and the communities to ensure that they have equitable access to socio-economic opportunities,” he said.
In the future, he added, Thar Foundation also plans to expand the scale and scope for building capacity and deploying meaningful interventions in Thar.
Mr. Naseer Memon, General Manager of the Thar Foundation also briefed the UNRC on various aspects of TF’s social interventions in the area..