Four years on, PML-N yet to submit party funding record in ECP: Farrukh 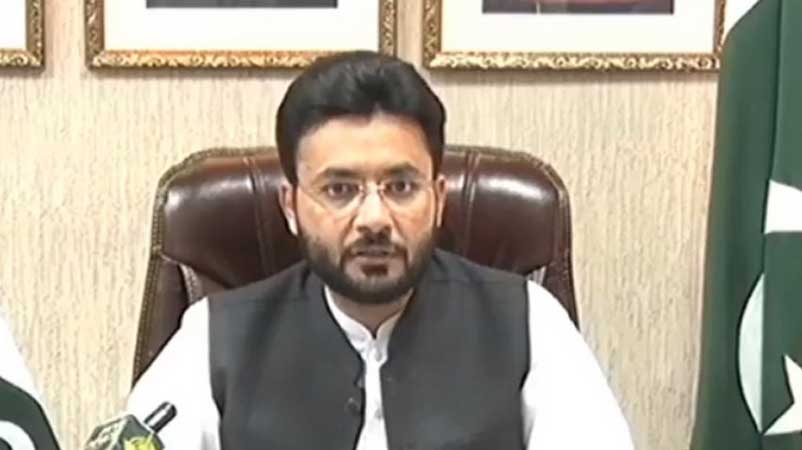 Minister of State for Information and Broadcasting Farrukh Habib on Wednesday said that the Pakistan Muslim League-Nawaz (PML-N) had failed to submit any financial record of its party funding to Election Commission of Pakistan (ECP) despite passage of four years.

Talking to the media persons outside the ECP, he said that the foreign funding case against both the PML-N and Pakistan People’s Party (PPP) was initiated in 2017, but the former kept 12 bank accounts secret, whereas the latter did not disclose details of seven bank accounts so far.

He challenged the PML-N to submit their party funding record in the ECP so that the public could know as to how they used their party accounts either to launder money or whiten their black money.

Transactions amounting to million of rupees were done through both the opposition parties’ bank accounts, he said, adding that those facts were needed to be brought to the fore as it was not only the requirement of Political Parties Order 2002 and Election Act 2017, but also of one of the apex court’s judgment in Hanif Abbasi case.

The minister called upon the ECP to allow its financial experts to perusal of all the financial documents of both the PML-N and PPP, submitted with the scrutiny committee.

He hoped that the Pakistan Tehreek-e-Insaf (PTI) would also be allowed to take along his financial experts during the security committee meeting for scrutinizing financial records of both the parties. Permission had already been given to others in the PTI foreign funding case, he added.

Commenting on the PML-N allegations of rigging in the Azad Jammu and Kashmir (AJK) elections, he expressed astonishment over the logic given by ‘Aristotle’ Ahsan Iqbal and ‘Mathematician’ Raja Farooq Haider that their party won only six seats after bagging 0.5 million votes while the PTI clinched 25 seats after securing 0.65 million votes.

He asked them as to why they did not opt for those skills of mathematics when the PML-N bagged more than 125 seats after getting over 10 million votes in 2013 general elections while the PTI won only 25 seats after securing 7.6 million votes.

He said the PML-N lost the AJK elections due to its narrative which remained limited to criticism of Prime Minister Imran Khan who in fact played a critical role in internationalizing the Kashmir issue and emerged as true ambassador of the people of Kashmir.

Maryam Safdar, on the direction of her father Nawaz Sharif, did not criticize her uncle Modi, condemn his RSS ideology and support Hurriyat leaders during the AJK election campaign, he added.

Lashing out at AJK Prime Minister Raja Farooq on his statement in which he regarded Kashmiris as ‘slaves’, he said Kashmir had been struggling for their freedom for the last 70 years.

Whether the sacrifices of Burhan Wani, Mirwaiz Umer Farooq, Sayed Ali Gilani and other Hurriyat leaders and martyrs of Kashmir were result of slavery, questioned Farrukh and said actually Kashmiris rejected this mindset of the PML-N in the elections of July 25.

He said the survey, released by Gallup Survey before the AJK elections, pointed out that the PTI enjoyed 44 per cent popular support in the valley, while PML-N and PPP had 12 and nine per cent, respectively.

Both the parties had no competition with the PTI, rather both the PML-N and PPP were competing for second and third position in the AJK elections, the minister noted and said their fight would continue for the seat of the opposition leaders in the Parliament in the next general election as their narrative was anti-state.

He lambasted the PML-N leader Nawaz Sharif for meeting Afghanistan’s National Security Adviser (NSA) Hamdullah Mohib, who according to Farrukh, was ‘ a daily wager of the RAW’ (Research and Analysis Wing).

Nawaz met the Afghan NSA in London to appease his friend Modi who was sponsoring terrorism in Pakistan and wreaking havoc on Kashmiris by committing worst human rights violations in the Indian Illegally Occupied Jammu and Kashmir, he added.

He said it was astonishing that the PML-N was expecting a heavy mandate in the AJK elections after developing relations with anti-Pakistan and anti-Kashmiris forces. There was no difference between Kashmiris living on both sides of the Line of Control as their heart beat in unison and with Pakistan, he added.

Farrukh said the PML-N logic of rigging in only those constituencies where they lost was beyond one’s understanding, adding that their narrative of vote fraud was only based on lies and lacked any concrete evidence.