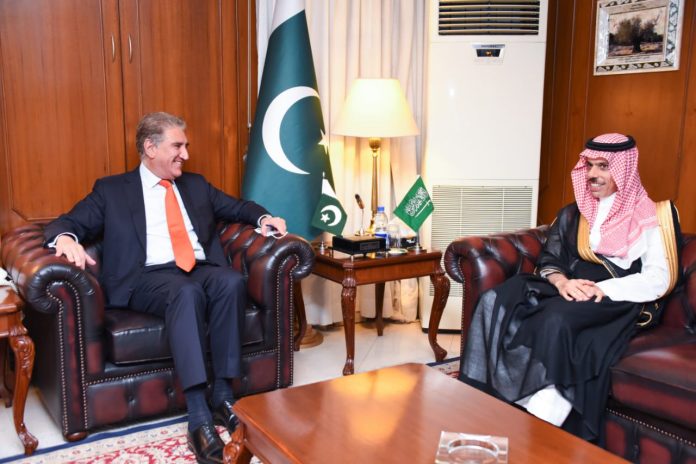 Qureshi said the relationship between Pakistan and Saudi Arabia had strong and robust foundations and was poised to acquire a new level, the Foreign Office said following the meeting.

He paid rich tribute to the Custodian of the Two Holy Mosques His Majesty King Salman bin Abdulaziz and Crown Prince Mohammad bin Salman for achieving new heights of progress and development of the Kingdom under their visionary leadership.

The two Foreign Ministers had wide-ranging talks covering bilateral relations as well as regional and global issues of common interest.

Recalling the successful visit of Prime Minister Imran Khan to Saudi Arabia in May tbis year, the two foreign ministers reviewed implementation status of the decisions taken during the visit.

The two sides agreed to continue working closely to further strengthen bilateral relations in all spheres, with a particular focus on trade, investments, energy, the environment, and culture.

The two Foreign Ministers expressed satisfaction on the ongoing work related to the Saudi-Pakistan Supreme Coordination Council (SPSCC), which is a highest level platform designed to impart strategic direction to the development of Pakistan-Saudi relations.

The two sides agreed that the SPSCC will play a catalytic role in fostering enhanced bilateral cooperation in all fields.

He highlighted Pakistan’s shifting focus from geo-politics to geo-economics – with emphasis on three central pillars of peace, development partnerships, and connectivity.

Qureshi highlighted the human rights situation in Indian Illegally Occupied Jammu and Kashmir and underlined Pakistan’s principled position on the peaceful resolution of the Jammu & Kashmir dispute in line with the United Nations Security Council resolutions and the wishes of the Kashmiri people.

He thanked the Kingdom for its steadfast support for the Kashmir cause.

Foreign Minister Qureshi also apprised the his Saudi counterpart about Pakistan’s perspective for lasting peace and stability in Afghanistan.

Emphasizing that there was no military solution to the conflict in Afghanistan, Foreign Minister underlined Pakistan’s sincere and serious efforts for an inclusive, broad-based and comprehensive political settlement in Afghanistan.

He stated that durable peace and stability in Afghanistan would open up new avenues for regional connectivity and economic cooperation.

Highlighting the hardships being faced by Pakistani nationals due to current Covid-related travel restrictions, Foreign Minister Qureshi expressed the hope that in view of improved situation on the ground in Pakistan, Saudi Arabia would take steps to facilitate their travel to the Kingdom.

Commensurate with the close and cordial relations between Pakistan and Saudi Arabia, the foreign ministers of the two countries hold frequent consultations on all subjects of common interest.

The visit of the Saudi Foreign Minister to Pakistan imparts further impetus to the positive momentum in bilateral exchanges and deepening mutual cooperation.

Foreign Minister Qureshi also hosted a luncheon in honour of the visiting dignitary and accompanying delegation.