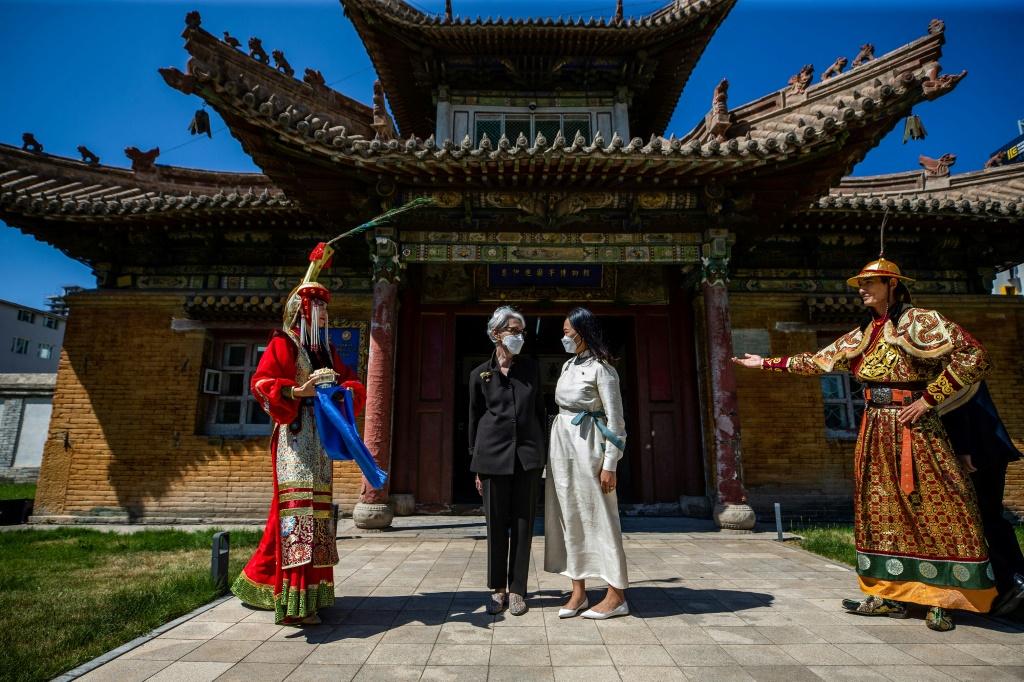 China on Monday urged the United States to be “rational” and stop “demonising” it as the highest-level US envoy to visit the Asian giant under President Joe Biden explored whether the two powers can find common ground.

Deputy Secretary of State Wendy Sherman was firm on human rights and other concerns, US officials said, in the first wide-ranging meeting between the world’s two largest economies since an acrimonious encounter between their top diplomats in March. The United States had said that Sherman was looking for “guardrails” in a relationship that has deteriorated over a range of issues from cybersecurity and tech supremacy to human rights in Hong Kong and Xinjiang.

Foreign Minister Wang Yi, meeting Sherman in the eastern port city of Tianjin, said the two nations should better manage their differences but warned that alleged US attempts to impede China’s modernisation are “doomed to fail”. “It is hoped that the US side will have an objective and correct understanding of China, abandon arrogance and prejudice, stop acting as a preacher and return to a rational and pragmatic China policy,” Wang said, as quoted by the state-run Xinhua news agency. He warned the United States not to “infringe” on Chinese sovereignty by raising human rights and urged Washington to lift a rising number of sanctions and restrictions on technology transfers.

Vice Foreign Minister Xie Feng earlier told Sherman that the United States must stop seeing China as an “imaginary enemy”. “The hope may be that by demonising China, the US could somehow… blame China for its own structural problems,” Xie said, according to China’s foreign ministry. Such language was reminiscent of senior Chinese official Yang Jiechi’s fiery criticism as he met Secretary of State Antony Blinken in March in Alaska. Unlike the talks in Anchorage, Sherman met Chinese officials away from the cameras, with US policymakers hoping to work quietly for more stability in the relationship even if they did not expect immediate progress.

Sherman tweeted that she “spoke about the United States’ commitment to healthy competition, protecting human rights and democratic values” with Wang. A US official described the talks as “professional” but direct, with Sherman at times “brutally honest” on issues including China’s alleged cyberhacking. The State Department said she raised concerns about human rights in Hong Kong, Tibet and Xinjiang, where the United States accuses Beijing of carrying out genocide against the mostly Muslim Uyghur people.

“We think it’s important for us to say directly to the Chinese officials in private what we say in public,” White House Press Secretary Jen Psaki told reporters in Washington on Monday after the talks. “It’s in our interest to be very clear to Beijing about where we stand and explain our concerns in detail,” Psaki said. She said the United States also believed there were areas on which to work together, including on the global threat of climate change. John Kerry, the former secretary of state turned climate envoy, has been the only other senior Biden official to visit China. Psaki said the United States believed there were other areas “where we might align” including nuclear diplomacy with Iran and North Korea, and crises in war-battered Afghanistan and military-ruled Myanmar. But on other regional issues, Sherman raised alarm about China’s rising military moves in the Taiwan Strait as well as its claims in the dispute-rife South China Sea. China in turn said it demanded that the United States stop pressure for a new probe into the origins of Covid-19, which was first detected in the Chinese city of Wuhan.

Biden has largely kept the hawkish stance on China of Donald Trump, describing the Asian power as the pre-eminent challenge to the United States, but has lowered the tone and instead emphasised working with allies and working at home to compete better. The visit is widely viewed as a preparatory step for an eventual meeting between Biden and Chinese President Xi Jinping, which could come at the Group of 20 summit in Rome in October. Biden similarly met in June with Russian President Vladimir Putin, with the two sides saying they wanted to reduce the room for miscalculation.