* Alvi urges people to 'get serious' as 3,752 more test positive in a single day 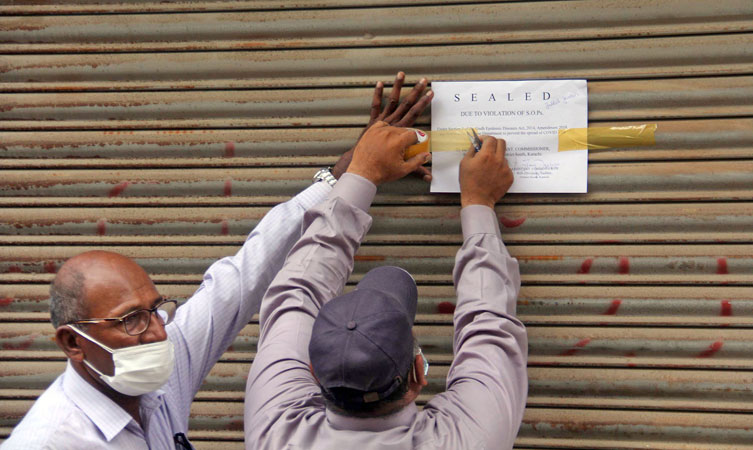 The national tally of total active Covid-19 cases was recorded at 57,799 on Monday, with 3,752 more people testing positive for the deadly virus and 1,641 people recovering from the disease during the last 24 hours.

At least 32 corona patients have died during past 24 hours, 31 of whom were under treatment in the hospitals and one of them perished in their respective quarantines or homes, according to the latest update issued by the National command and Operation Centre (NCOC). Most of the deaths occurred in Sindh followed by Punjab. Out of the total 32 deaths occurred, 21 of them died were under treatment on ventilators.

There were 2,677 Covid infected patients under treatment in critical condition with 104 of them admitted during past 24 hours in various Covid dedicated healthcare facilities of the country.

The National Covid positivity ratio during past 24 hours was recorded 7.51 percent.

The maximum ventilators were occupied in four major cities including Islamabad

Around 277 ventilators were occupied elsewhere in the country while no COVID affected person was on ventilator in Balochistan.

About 23,048 deaths were recorded in country since the eruption of the contagion. Around 5,833 people perished in Sindh, 19 of them died in the hospitals on Sunday.

10,944 people died in Punjab died with five deaths occurred in past 24 hours. Four individuals died in the hospitals and one out of the hospital.

A total of 15,717,061 corona tests have been conducted so far, while 639 hospitals are equipped with COVID facilities across the country. Some 3,045 corona patients were admitted to hospitals.

President Arif Alvi on Monday urged the masses to ‘get serious’ about the sharp increase in Covid-19 cases – fuelled mostly by the spread of the Delta variant – and to comply with the SOPs to mitigate the virus’ spread. “Alarming. 3752 new Covid patients y/day. Get serious people of Pakistan,” President Alvi said on Twitter.

The president said he had been ‘expecting and warning’ the people as he saw a lack of compliance and carelessness in bazaars, weddings and markets. He further said the people should put their ‘act together’ and follow the government’s SOPs to curtail the spread of the deadly virus. In another tweet from his personal account, the president urged the masses to vaccinate themselves and ‘save your friends, relatives and your nation’.

“The important test is to rise to the occasion,” he remarked. On Sunday, Sindh reported its highest number of coronavirus cases in over a year as the highly contagious Delta variant continues to spread in the province particularly in its capital, Karachi. According to Chief Minister Syed Murad Ali Shah, the province reported 2,343 cases during the last 24 hours, lifting the tally to 367,075.