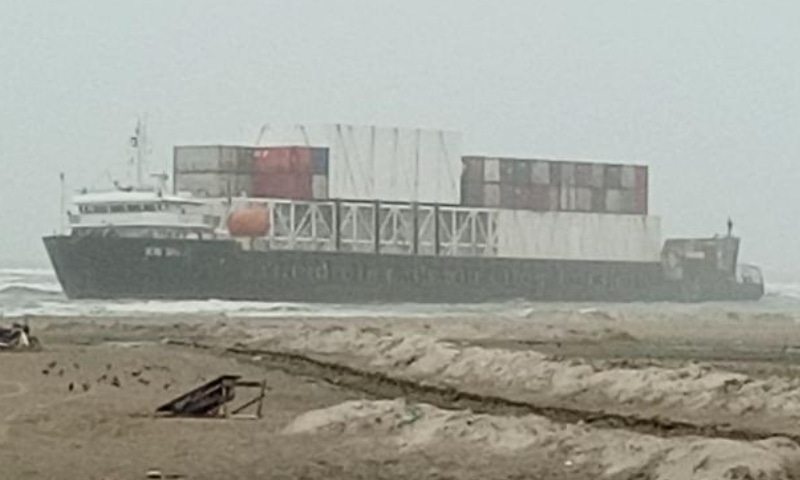 KARACHI: The cargo ship stuck at Karachi’s Clifton beach  for past few days will not be able to move before August 15, Special Assistant to the Prime Minister on Maritime Affairs Mehmood Moulvi revealed Monday.

Briefing the media during a press conference with Federal Minister for Maritime Affairs Ali Zaidi, Moulvi briefed that authorities concerned will have to fix the oil leakage from the ship first so that it could be moved.

Replying to a question, the SAPM said that the port remained closed during the Eid holidays because of which work was brought to a temporary pause, adding that when the rescue team initially reached near the ship to help it move, water had entered already entered the vessel. He further said that the ship’s engine was very weak to make it work.

On the other hand, the captain of the cargo vessel has rejected the statement issued by Federal Minister Ali Zaidi and has claimed that he had made an emergency call but the authorities did not provide them with a safe place to park the ship at the port.

The captain of the cargo vessel, claimed that he made the SOS call on July 20 when the chain of one of the ship’s anchors broke and sank in the sea. The captain kept on his claims that he had requested the authorities to provide them a berth on emergency basis as it was nearly impossible for him to control the vessel with only one anchor.

He said that the authorities at Port Muhammad Bin Qasim and Manora were also hearing the emergency call but the Karachi Port Trust (KPT) control room did not provide them any help. The captain said that he had been told the concerned officers were in an important meeting.

He said that all the communication data was saved with them. Meanwhile, the shipping sources said that a rescue operation to drag the ship into sea could not be started yet as the tugboats were awaiting permission.

The sources feared that the ship may be further stuck in the sand if the tugboats are not given permission. KPT sources said that the vessel’s owner had lodged an insurance claim. The insurance claim could be worth millions of dollars, said the sources.

Audio recording between captain and the control tower

Geo News has obtained the audio recording of the conversation between the captain and the control tower. In the audiotape, the captain can be heard seeking help from the authorities. “MV Heng Tong is contacting the Muhammad Bin Qasim port’s control on channel 16,” the captain sent the message thrice.

Meanwhile, the authorities directed the captain to contact on channel 10. The captain did not get any response when he contacted channel 10. After few minutes, the captain decided to seek help from Karachi Manora control and said,” our ship is heading towards the shore and it may ground.”

The captain again asked,“ Have you heard my message?” “Sorry we cannot help you,” the control tower replied, as per the recording.