The method in madness 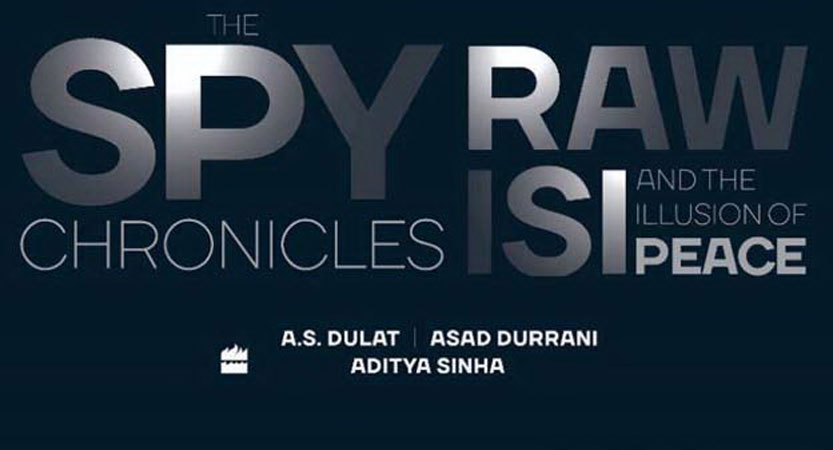 The geostrategic significance of both India and Pakistan, the shared past and a bloody partition makes them bitter rivals. Almost as early as independence, both countries maneuvered and fed into the engines of war-their militaries and intelligence organisations. Today, these competing neighbours have amassed one of the largest and sophisticated war machines to counter impending threats by the other, promising large-scale annihilation of life in the region.

Intelligence organisations not only aid in periods of war and peace by providing information which is used to counter the enemy. India and Pakistan considerably invested in their intelligence units, which mushroomed into a deft network, operating at home and abroad. Today, the world sees ISI (Inter-Services Intelligence) and its 20-year younger counterpart RAW (Research and Analysis Wing), as one the most advanced agencies with ISI as a trailblazer.

Spy Chronicles-RAW, ISI and the Illusion of Peace contains candid discussions among friends about the business of espionage. Apparently, the publisher had urged that the two authors write it in a format of a dialogue, quoting from Hitchcock/Truffaut. And it works perfectly. Readers witness unfolding poles of unique perspectives into the same scenarios.

General Asad Durrani and Amirjit Singh Daulat are the unlikeliest of friends. One would expect that the chief of ISI and RAW would be no less than sworn enemies. ‘No one would believe us if we wrote fiction,’ remarked the General when approached with the idea of the book.

While contacts between the most resolute adversarial intelligence agencies would be a rarity, no wonder then the joint publication of two intelligence chiefs from India and Pakistan ruffles some feathers.

The chiefs developed a friendship that goes back in time to when the General, as Asad Durrani is fondly called in the book, was posted as an Attaché in Germany. Later, their families also got to know each other during the Track-II diplomacy. A. S. Daulat had already penned a book on the Vajpayee years and had written a paper on strategic policy for University of Ottawa journal with the General that he approached him with the idea for a book.

Peter Jones, of the University of Ottawa’s Centre for International Policy Studies was at the helm of the Track-II dialogue, facilitated the 3 private meetings-Istanbul 2016, Bangkok 2017-that produced 1,70,000 words for the book.

The authors agree that ISI is noted for its record for enlisting the most professional spies who have never been captured on the job. We come across views on the CIA and RAW. However, the certain notoriety of the agency is discussed for being the deep state in Pakistan. General Asad Durrani, however, admittedly says that the interference or the designs of ISI in the matter of the state haven’t often borne their intended results.

Similarly, the matter of Kashmir is the main contention between these neighbours. A.S. Daulat has had quite some expertise in the region. He shares vignettes while remaining circumspect in conveying his disapproval against the dehumanizing state treatment of Kashmiris. The issue of Kashmir for all stakeholders is discussed. A.S Daulat sees similarities among the problems in Kashmir, Balochistan and Afghanistan.

The new great game and regional relationships with Putin and Trump entice the chiefs as much as all readers, while the war on terror and the region raises questions about Kulbhushan Yadav, Hafiz Saeed, etc,.

The Indian nostalgia of an akhand bharat is one of the strongest straws in the book and is mulled over through a deep contextual debate. Kashmir and Punjab people to people contact has been a good start, the chief’s deem. Daulat however sees Modi in India in a different light. The Gujral and Shahbaz efforts could have brought out different results. Musharraf, had he remained, could have led the regional relationships differently. To the General however, an Afghan-Pakistan merger seems more plausible than Kashmir.

Ye Dewangi kab khatam hogi? The sentence by Hamid Ansari spurred the very idea of this body of dialogue. The jingoism to keep people away from their friends in neighbouring India. Daulat iterated how Umerkot’s Hindus were happy where they lived and wanted no part in Indian state.

A.S. Daulat says that the book addresses hope, understanding and admiration. We are impressed to view the two friendly rival intelligence chiefs as a metaphor for improved relationship between the neighbours. And that is one of the purposes behind the book. The General was also motivated by sharing some information to air the misperceptions about significant regional events.

Those looking for any secrets spilled by the members of the espionage rivalry would be disappointed. Where convenient, questions are left unanswered. Despite the circumspection by chiefs of ISI and RAW, the book caused quite a commotion in Pakistan where General Asad Durrani was accused of betraying his country. Punitive actions were served by the GHQ for not having taken the permission before entering the project. General Durrani’s name was placed on the Exit Control List (ECL) and his retirement privileges were struck.

The general has since published two more books (Pakistan Adrift: Navigating Troubled Waters (Hurst, 2018) and, Honour Among Spies (Harper Collins, 2020) book in 2020) the last addressing his experience after the publication of The Spy Chronicles.

The writer is an academic, consultant and journalist. She can be reached at Ameera@javeria@soca.uol.edu.pk