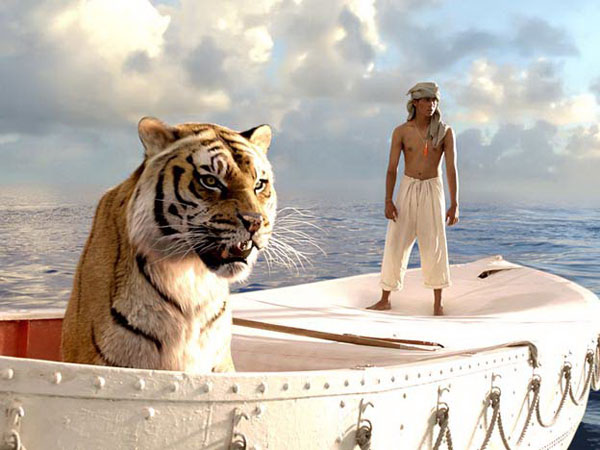 Life Of Pi is one of those rare films that amaze, inspire and leave you in awe of the human spirit – all at the same time. A screen adaptation of a bestselling book by a visionary Academy Award winning director, one can only expect brilliance. And the brilliance it delivers. Man against nature, man against animal, cast away, doomed by destiny- it is a survival story like no other. A story told with beauty, elegance, spirit and an exceptional bit of enchantment.

A story that begins in a small family owned zoo in the enchanted town of Pondicherry, a boy Pi and his family live typical small town life. Each aspect of his childhood story is divinely real, from his name to the entry of the new tiger in their zoo (Richard Parker) to the lessons his father taught him as a child.

When the zoo goes broke and they decide to ship themselves and the animals to Canada, a shipwreck dooms the teenage boy to destiny. Cast away by a storm in a lifeboat with an adult Bengal Tiger in the middle of the Pacific.

Life of Pi is an exceptional story of survival. With a bucket, a knife and a guide book as his prized possessions, Pi and his fierce companion spend 227 days cast away on an adventure of hope, strength and human spirit. A story like that takes immense bravery to adapt to screen. And what an adaptation indeed.

Ang Lee is a visual artist, he paints on screen, paints like he is Picasso’s heir. CGI on Richard Parker the ferocious Bengal Tiger is by far the best animation I have seen. Richard Parker is real, as far as I am concerned- he is no CGI tiger. He is every bit the rival and companion to Pi that we see. Suraj Sharma as Pi pulls off a remarkable performance, emoting vulnerability, spirit and wisdom through his young eyes. Irrfan Khan as always throws in a bankable performance as the middle aged Pi narrating his story.

Despite such a spectacular visual experience and such brilliant storytelling, Life of Pi is still at 3.5 not 4 stars. And there is only one reason for that. A story of this magnitude, a story with so much depth, required far more than a 125 min screen adaptation. No matter how hard you try, you cannot capture the depth of an epic story like that in 2 hours. It is going to lack depth. Pi is going to feel underdeveloped as a character.

Pi’s childhood in itself is a 2 hour film. His 227 days as a castaway should be as long as a Lord Of The Rings Trilogy. But with all due respect, if Life of Pi was to be made into a film, it couldn’t have been better than this. Kudos Ang Lee, I sense another Academy Nomination here.