At Paisley Park, Prince’s ‘aura of mystique’ lives on 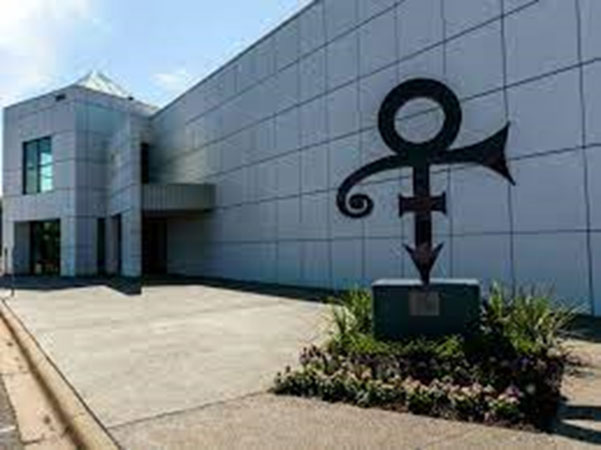 To the uninformed eye Paisley Park, Prince’s home and studio in suburban Minnesota, could be anything — an abandoned mall, a government compound, a utilitarian office building.

It’s only the 11-foot purple love symbol statue, the unpronounceable glyph the artist famously went by during a dispute with his label, that gives the 65,000-square foot complex away as belonging to the artist beloved as Prince.

Situated just off the highway leading southwest out of the Twin Cities in the municipality of Chanhassen, Paisley Park served as the virtuoso international pop star’s creative and literal home, a sanctum where he spent nearly three decades before he collapsed in an elevator there, dying soon after of an accidental painkiller overdose.

Sunlight streams in from the glass pyramid that crowns the complex, where white doves watch over the breezy atrium painted with blue skies and fluffy clouds.

With four recording studios, a soundstage and a club, Paisley Park for years hosted artists including Madonna, Miles Davis and Patti LaBelle, also holding concerts and impromptu performances to the delight of fans.

The estate was a site of pilgrimage even before the artist’s death at 57, and today has taken on new life as a museum.

Faced with a tax burden following Prince’s passing, his estate looked to monetize the compound. Six days a week fans can take guided tours at costs ranging from $45-$160, depending on the experience.

Visitors must seal their cell phones in special pouches at the entrance, and much of Paisley Park prohibits photography, a bid to stay in line with the artist’s wishes.

“Prince always preferred that you experience things here at Paisley through your own lens, rather than your camera,” Mitch Maguire, the complex’s managing director, said during a visit by AFP.

“Prince was really good at creating an aura of mystique.”

Prince’s living quarters are off-limits completely — “there’s something that I think is really reverential about ensuring that those spaces remain just his” — as is the storied vault where he stored troves of unreleased music, Maguire explained.

The 12,500-square-foot soundstage, designed for concerts and tour rehearsals, is now backdropped by a giant screen that displays archival Prince concert and video footage, with many of his instruments and concert attire on display for visitors.

In another room the museum is putting on a special exhibition, showing hundreds of Prince’s custom-made shoes — including heels, platform sneakers and roller skates — in all their fur-lined, glittering, iridescent, hand-painted glamour.

Prince was a mainstay of Minneapolis’ cultural scene, regularly hosting surprise concerts with little notice at Paisley Park. And years before he directed the museum, Maguire was a fan in the crowd.

“I think the accessibility that we had as folks who lived in this community to Prince’s genius is really second to none,” he said.

And to watch him perform there?

“It’s difficult to articulate; I don’t think there are enough words in the English lexicon to fully do it justice,” Maguire continued.

“You just got the sense this guy could move mountains by his gifts, and he was very generous in terms of sharing those gifts with us.

The compound continues to hold live music events and also has hosted artists’ recording sessions there, including the likes of Beck.

In 1985, two years before his complex opened, Prince released the song “Paisley Park” on his seventh album “Around The World In a Day,” describing a utopian community that was as much spiritual as it was tangible.

“Love is the color / This place imparts,” Prince sang. “Admission is easy / Just say you believe.”

“Paisley Park is in your heart.”