The ultimate ‘Game of Thrones’ getaway 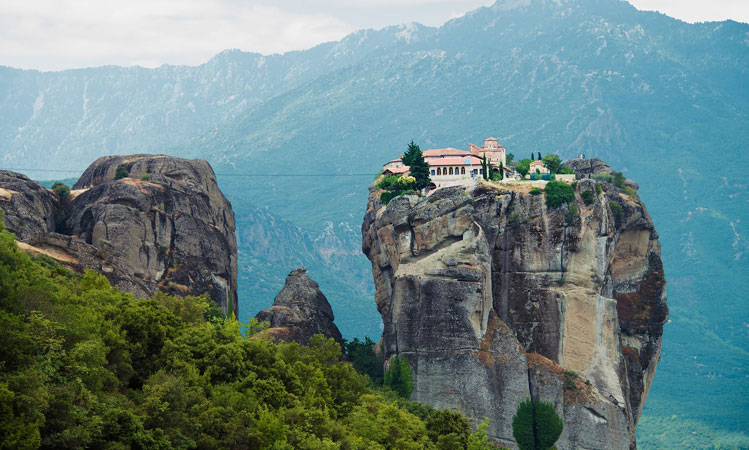 Hotel stays don’t get much more heavenly than this. A former 15th-century monastery in Croatia has been stunningly transformed into a beautiful boutique property reminiscent of a Game of Thrones set.

Guests can enjoy ‘unique suites filled with rare pieces of art’, relax in an ‘ancient medicinal garden’ with over 80 species of plants and ‘eat delicious local wine and food, created by world-class chefs’. There are also spell-binding coastal views, because the property sits right next to the glittering Adriatic Sea on Lopud island, just seven miles from Dubrovnik.

The hotel’s origins can be traced to the year 1483. Back then it was a monastery for Franciscan monks called Our Lady of the Cave.

Monks lived at the monastery until 1822, when it was seemingly abandoned, having fallen into disrepair and become uninhabitable.

In 1992, the ruins of the complex were spotted by London-based art collector Francesca Thyssen-Bornemisza, while on a boat trip to Lopud with a local friar. She had been visiting Croatia to help to rescue artworks damaged in the war after the break-up of the Balkans.

She couldn’t believe ‘such an architectural marvel’ had been neglected for so long and soon after paid a second visit to the monastery with world-renowned architect Frank Gehry.

Gehry persuaded her to take on the restoration and she set about a 20-year project to transform the monastery and its adjoining fortress, which needed to be rebuilt – although miraculously some of the original plaster from the 16th century had survived.

Engineers managed to consolidate the structure – without losing the patina of the walls – while architect Rujana Markovic planned the monastery’s new layout.

Now called Lopud 1483, it boasts five ‘generous suites’ rather than 12 small monk cells, with each one featuring ’21st-century technology and amenities’.

The hotel’s origins can be traced to the year 1483. Back then, it was a monastery for Franciscan monks called Our Lady of the Cave

Meanwhile, the hotel says that in the suites and around the rest of the property, guests will be able ‘to live in the manner of great art collectors’ thanks to an impressive collection of artworks.

The selection of works housed in the monastery includes ‘original renaissance and Gothic furniture as well as decorative arts and paintings’, most of which adorned the Thyssen-Bornemisza home – Villa Favorita in Lugano, Italy – and are being presented in the monastery for the first time in decades.

In the entrance to the property, there are two wood-carved angels that used to grace the entrance to the Villa Favorita museum in Italy. The heavy walnut dining table in the old refectory dates from 1550 and was used by Thyssen-Bornemisza’s father at his home for dinner parties. It is surrounded by walnut leather chairs, made in Dresden in the early 18th century.

An early 1600’s masterpiece by Furini of St Sebastian hangs above it, alongside a cabinet holding precious Renaissance mugs, chalices and decorative bowls collected by her grandfather.

Also found in the dining room is one of Thyssen-Bornemisza’s favourite pieces – a Franco Maria Pretti painting of the liberation of St Peter, which is dated 1645.

In the salon, there is a 16th-century tapestry of a king, who was dedicated to collecting rare species of flowers. This competes for attention with an impressive Thomas Struth photograph of the Raffaelo chambers in the Vatican.

The monastery also boasts a recreation of an ancient pharmacy, which includes original 15th and 16th-century manuscripts and mortars. Franciscan monks, like the ones who used to live in Lopud 1483, specialised in creating medicines and their pharmacy in Dubrovnik dates back to 1317.

Outside, in the medicinal herb garden, wide lawns have been created, dotted with olive and lemon trees and intersected by a gravel path and a long pergola.

It has ‘nine stations in energetically charged places and beds of healing botanicals’ where guests can meditate.

For those preferring to just lie and soak-in the sea views, a wooden deck has been set into the lawns and scattered with beanbag loungers.

Meanwhile, above the monastery, on the rooftop of the fortress, a sunset terrace has been created, complete with loungers and shaded four-poster daybeds.

Guests here can gaze at Lopud’s village and coastal paths, as well as the neighbouring islands of Sipan and Mljet and, on a clear day, Korcula – the reputed birthplace of Marco Polo. Direct sea access is possible, meanwhile, via a secret underground cave, which the monks would use to go for discreet dips in the sea.

On the food front, guests will enjoy dishes made from traditional recipes and Croatian ingredients such as oysters from nearby bays, Dalmatian ham, locally caught fish and octopus.

Meals will be served outdoors, in the formal dining room or in the Old Kitchen, with its ancient open fireplace and bread oven, which is used to make fresh pizzas.

The hotel offers versatility, too.

Groups can take over ‘The Map Room’, a multi-purpose indoor space ‘appointed with high tech audio and visual equipment available for conferences for up to 30 people’.

The hotel says the space can also be transformed into a dedicated children’s area, private cinema room or for a yoga and therapy retreat.

Meanwhile, the 400-square-metre fortress ‘provides an incredible fresco rustic event space, complete with a high-end projector and sound system, with the ability to host parties for up to 250 people’.

The hotel says: ‘This special property offers the perfect balance between contemporary comforts of a modern home within an authentic historical setting, complete with splendid views over the Adriatic and its numerous islands.

‘The 5,000-square-foot monastery complex offers complete privacy and security as it is surrounded on all sides by an impressive fortification, crowned by a renaissance fortress reminiscent of a Game of Thrones set, which doubles up as an event venue.

‘Lopud 1483 is a place that encourages togetherness, whilst also providing for solitude and silence.’