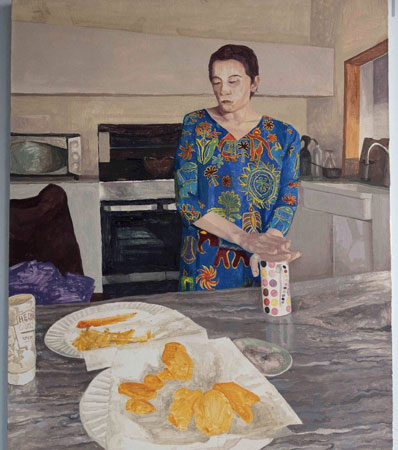 In ‘Sailoon and Other Stories’ by Karachi-based artist Fiza Khatri, a sink with locks of hair presents itself in two paintings. We don’t know what led the person to chop off their locks. We don’t know what will happen after. Was it a routine haircut or something more? We want the painting to answer.

The sheer number of tropes in popular culture are enough to tell us that haircuts are more than just a matter of personal grooming. From “ugly ducklings” such as Eliza in Pygmalion or Vivian in Pretty Woman to break-up shaves like actor Kristen Stewart’s, hair makeovers are significant. But, more importantly, they are relatable. The Sink was a self-portrait made following a break-up that led Khatri to give herself “bold and drastic haircuts”, she writes in the exhibition note.

The 29-year-old says, “It’s about ownership over one’s body and what one can or cannot do with it.” The exhibition is presented by Mumbai- and London-based gallery Jhaveri Contemporary, available for viewing on their website and by appointment at their London space till July 31.

The theme of haircuts and the experience of queerness comes up both directly and subtly in a number of works in this show. In Two Heads, viewers could be drawn to the figures’ tresses as much as the companionable space they share with each other. Another work, titled Shining, is set in a barber’s shop with an infinity mirror effect. Khatri explains that the painting references a barber shop in Kathmandu, where she was part of Photo Kathmandu Mixed-Media Artist Residency in 2018. In need of a haircut, she followed a friend’s suggestion that this particular barber would be “an experience”.

Far from being intimidated, Khatri enjoyed being at a barber’s shop. As a child, she was often taken there for a haircut but the older she got, parlours became the norm. The distinction between barber shops and hair salons cuts across class and gender in South Asia. Khatri says, “I was taught that I am not welcome in a barber shop but that is not true. It’s possible that these spaces exist that allow us to transgress gendered boundaries.” Even if there was an initial discomfort, Khatri’s experience is inscribed in the painting. The figure takes a selfie, the barber joins in and so do other customers – all of them reflected in the mirrors. Even Sailoon, the titular drawing in the exhibition, shows a salon as a place of joy and pleasure, with festoons and signage, a place for both “ladies and gents”.

The works in this exhibition are tied to Khatri’s experience of living and growing up in a South Asian context, even if the cues are universal. It was during her undergraduate years at Mount Holyoke College in Massachusetts, US, that Khatri first got her chops-her hair shortened from her stomach to almost a pixie. Back in Karachi, people weren’t sure how much space to give her and her friends with short hair. Once at a supermarket, a man pushed her and apologised later, not for his rudeness but because he realised Khatri wasn’t a man.

Priya Jhaveri, who co-owns the gallery along with her sister Amrita Jhaveri, says that Khatri’s ‘Sailoon and Other Stories’ is presented in dialogue with their ongoing show in Mumbai, ‘On Earth We’re Briefly Gorgeous’, wherein the works of London-based artists Sunil Gupta, Prem Sahib and Jake Grewal are on view until July 31. Priya says that the three artists together present “an intergenerational dialogue invested in queer intimacies”. A few weeks after the show’s opening, the gallerists were introduced to Khatri’s practice. With pride month round the corner and India back in lockdown, they decided to explore a hybrid model of showing Khatri’s work online and by appointment in London. “Fiza’s paintings chart her own lived experience of queerness. Beyond affinities, there are marked differences that warrant the most interesting of dialogues,” Priya says. While Gupta’s protagonists in the 1980s are anonymous, Grewal’s figures are elusive and otherworldly, and Sahib’s framing of the body is marked by its conspicuous absence, Khatri offers up her immediate world of friends, family, pets through near-realistic portraits.

A number of portraits appear in this exhibition, collecting friends, family and animals. In one, a maternal figure stands at a kitchen counter, a plateful of pakoras in front of her. In her exhibition note, Khatri says that she associates pakoras with rain, Ramzan and her mother. One imagines that they are everything pakoras should be-hot, crispy and comforting. The painting is titled Heartbreak Pakoras and one can only wonder why. In another portrait, Iva’s Spread, tarot cards take the place of pakoras, another offering of comfort.

The portraits extend to the idea of family, from the ones we are born into to include the ones we choose. “How do we formulate communities outside of what we are told are the primary communities in our lives? People, animals and plants can be a part of that,” she says.

While viewers can follow the two clear strands of thought in the exhibition-the hair stories and the portraits-a third strand presents itself. In The Sink, a butterfly appears at the corner of the mirror as the ubiquitous sticker in our bathrooms, sometimes an indelible remnant from our childhoods. Tarot cards offer a glimpse into unknown futures and perhaps the pakoras recall heartbreak because something has changed. Transformations, the kinds that make us cut, shave or keep our hair, are here in Khatri’s works. Things are changing, but friends and pakoras may be forever.