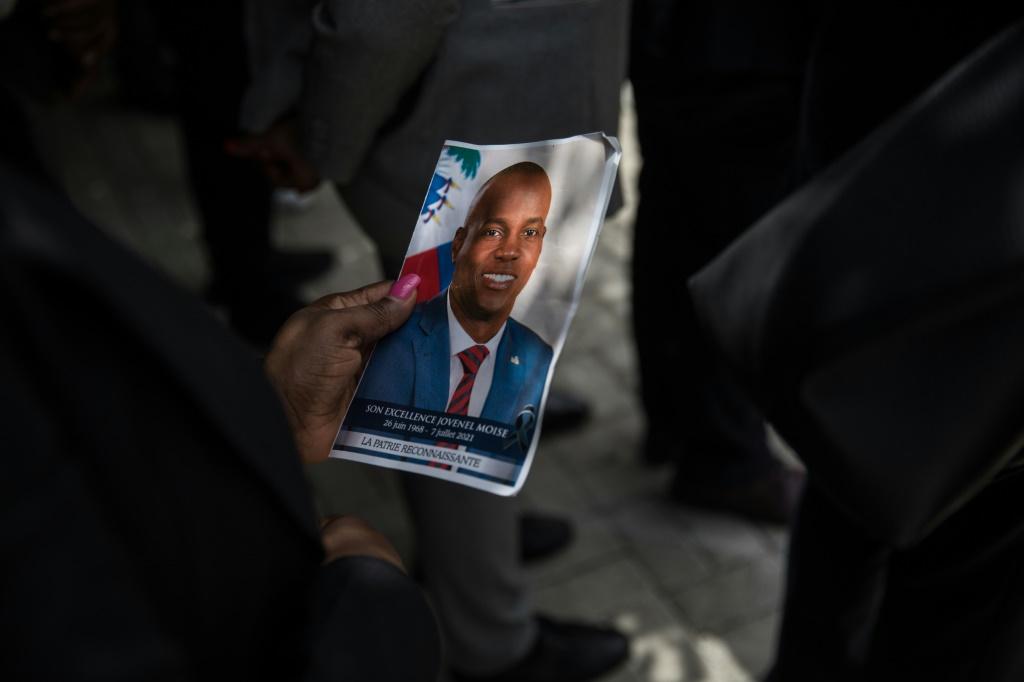 Haiti said farewell Friday to its slain president Jovenel Moise under tight security at a state funeral marred by an eruption of gunfire outside the venue, highlighting the instability of the impoverished Caribbean country.

Just over two weeks after the 53-year-old Moise was shot dead in his home in Port-au-Prince in the early hours of July 7, he was interred in Cap-Haitien, the main city in his native northern region. In an open-air funeral lasting several hours, Moise’s coffin was draped in the red, white and blue Haitian flag and the presidential sash, and surrounded by flowers. Military guards kept watch, and soldiers performed the national and presidential anthems. One by one, representatives of the government and foreign diplomats stopped to pay their respects to Moise’s widow Martine — who was seriously wounded in the attack that killed her husband, and required treatment in the United States.

She had her arm in a sling and wore a black hat and a mask bearing a photo of her late husband on one side. “What crime did you commit to deserve such punishment?” she asked in an emotional eulogy, calling Haitian politics “rotten and unfair” and insisting her husband had tried to clean it up before being “savagely murdered.” “Overnight, he found the whole system lined up against him,” the widow said, nevertheless noting she was not seeking “revenge or violence.” Despite her praise, the late president was not a popular man — many people accused him of failing to make progress on the country’s many woes. And in a sign of Haiti’s chronic security problems, despite a robust police presence in the streets of Cap-Haitien, gunfire rang out during the funeral, prompting some in attendance to leave early.

US President Joe Biden had sent a high-level delegation to the funeral, including his ambassador to the United Nations, Linda Thomas-Greenfield, and his new special envoy to Haiti, Daniel Foote. “Members of the presidential delegation to the funeral of president Moise have arrived safely back in the United States,” Thomas-Greenfield said in a statement, underscoring her country’s committment “to support an inclusive and peaceful dialogue in Haiti.” US National Security Advisor Jake Sullivan said Washington remained “deeply concerned about the situation on the ground in Haiti.” “We strongly urge all parties to express themselves peacefully, and call on Haiti’s leaders to be clear that their supporters must refrain from violence,” Sullivan said in a statement.

So far, more than 20 people have been arrested in connection with Moise’s assassination, most of them Colombians, and police say the plot was organized by Haitians with political ambitions and links outside the country. But the case remains murky, with many unanswered questions, such as how no members of the presidential security detail were wounded in the brazen assault. Haitians have expressed shock that those tasked with protecting the president and his home failed him so abjectly.

Haiti is riddled with crime and powerful gangs — problems that were exacerbated during Moise’s presidency Earlier this week, clashes broke out in Cap-Haitien when police chief Leon Charles visited ahead of the ceremony. He was booed and heckled while inspecting security arrangements for the funeral by local residents who blame him for not protecting Moise. In Cap-Haitien on Friday, several roads were blocked by barricades and cars in flames. Several businesses were torched. Local and foreign journalists were attacked by protesters.

Memorial ceremonies in honor of Moise have been held this week in Port-au-Prince as well. Attending one of them was new Prime Minister Ariel Henry, who was sworn in Tuesday and vowed to restore order and organize long-delayed elections sought by Haitians and the international community. Haiti currently has no working parliament and only a handful of elected senators. The interim government installed this week has no president.

Washington has said elections should be held later this year. Moise had ruled Haiti, the poorest country in the Americas, by decree after legislative elections due in 2018 were delayed in following multiple disputes. As well as presidential, legislative and local elections, Haiti had been due to have a constitutional referendum in September after it was twice postponed due to the coronavirus pandemic.