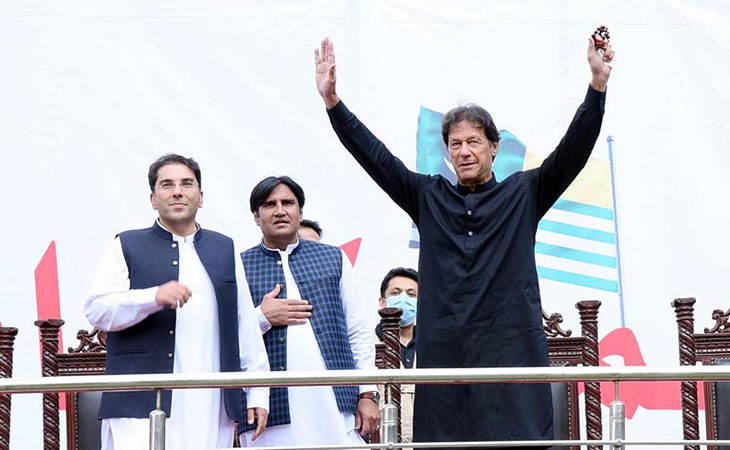 Prime Minister Imran Khan on Friday said contrary to the corrupt leaders, who being the slaves of their wealth cannot speak against tyranny of Narendra Modi regime and its RSS ideology, he will continue to plead the case of innocent Kashmiris at all international forums.

“When you have money abroad, you become the slave of that wealth. When you have your stolen properties and wealth abroad, you are controlled from abroad,” Imran Khan said while addressing a public gathering here on the last day of election campaign for the AJK Legislative Assembly.

The prime minister said Pakistan People’s Party (PPP) leader Benazir Bhutto and Pakistan Muslim League-Nawaz (PML-N) leader Nawaz Sharif, who were part of the All Pakistan Democratic Movement (APDM) along with the Pakistan Tehreek-e-Insaf (PTI), wanted to boycott the 2008 general election but later decided to take part in the polls on foreign influence. He referred to a telephonic conversation between Benazir Bhutto and Bilawal Bhutto Zardari mentioned on page 292 of a book titled “The Way of the World” written by Ron Suskind, during which she told the details of her bank accounts and properties abroad to her son. He said the conversation, which was recorded by a foreign agency, later led to a deal (National Reconciliation Ordinance – NRO) between Benazir Bhutto and the then President Pervez Musharraf on foreign influence.

Similarly, Nawaz Sharif, who was part of the APDM which wanted to boycott the 2008 election and was demanding restoration of the chief justice, later decided to take part in general election on the orders from abroad, the prime minister said. “Leaving us (APDM) standing at a canal bridge, Nawaz Sharif decided to participate in the 2008 general election,” Imran Khan remarked.

The prime minister said the people of Azad Kashmir should question the two old political parties (PPP and PML-N) what they had done for them and for the Kashmir cause during their respective five-year government tenures in the AJK and were again seeking the mandate. Imran Khan said instead of raising his voice against the Indian atrocities in the IIOJK, Nawaz Sharif invited Narendra Modi on the wedding of his granddaughter and did not even meet Hurriyat leaders during his visit to New Delhi on the inauguration of Modi as prime minister. Nawaz Sharif, he added, wanted to make Narendra Modi his friend as he (Modi) could help him with lobby in America through Israel.

He said according to a book titled “Obama’s Wars” written by Bob Woodward, the then president Asif Ali Zardari told a US general that he (Zardari) had no problem about the collateral damage – killing of innocent people, including women and children – in the drone attacks. Similarly, he said, they did not raise their voice for the people of Palestine.

Imran Khan said some political parties are crying foul about rigging in the upcoming AJK elections despite the fact that for last one year, he had been inviting them for electoral reforms to ensure transparency through electronic voting machines. Those making a hue and cry of false rigging assumptions were, in fact, afraid of their defeat in the elections, he added. “How can the PTI carry out rigging with Pakistan Muslim League-Nawaz (PML-N) government at the helm of affairs in the AJK, having its administration and the election commission of its choice,” he questioned.

He said when he used to play cricket, it was standard practice for countries to have their own umpires, and teams that were fearful of losing against a powerful team, would preemptively raise a hue and cry about losing the match due to the other country’s umpire officiating. “The Noon League, which I truly believe has never done a single thing with honesty, likes to play with umpires of its own choice,” he added.

Prime Minister Imran Khan promised the people of Kashmir that his government will hold a referendum in which they can choose to join Pakistan or become an independent state if they wish. He rubbished talk of him “wishing to turn Azad Jammu and Kashmir into a new province of Pakistan”. “I do not know where all this talk has sprung from,” he said, dismissing any notion of such an idea. “I want to clarify to all of you today. InshaAllah, a day will come, when all the sacrifices made by the people of Kashmir, will not be wasted. God will grant you that right. There will be a referendum, InshaAllah.”