* Breezy, endearing and with a lot of heart, 'Feels Like Ishq' explores the various shades of love and affection with a small baggage of complications and uncertainties 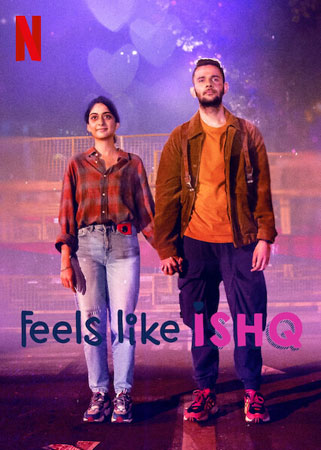 Netflix is on a roll with its slate of anthologies. After exploring fear, lust, absurd and Satyajit Ray, they have zeroed in on love with ‘Feels Like Ishq.’

Eschewing messy relationships and the dark side of romance, Feels Like Ishq embraces first rush of love.

Breezy, endearing and with a lot of heart, ‘Feels Like Ishq’ explores the various shades of love and affection with a small baggage of complications and uncertainties.

The latest offering from Netflix features six stories from directors Ruchir Arun, Tahira Kashyap Khurrana, Anand Tiwari, Danish Aslam, Jaydeep Sarkar and Sachin Kundalkar. From commitment phobia to meet-cute tales and crushes, the series sets out to explore romantic notions of love at different stages of life. While Tahira Kashyap’s Quaranteen-Crush portrays the heartaches of school crushes, Ruchir Arun’s Save the Day is the story of a wedding planner and a bridesmaid trying to find a missing bride. In Danish Aslam and Sulagna Chatterjee’s story of She Loves Me, She Loves Me Not, a woman falls in love with her colleague, but is unsure of revealing it to her. Meanwhile, in Jaydeep Sarkar’s Ishq Mastana, two activists fall in love, during a protest.

In Anand Tiwari’s Star Host, Rohit Saraf’s Aditya collides into Simran Jehani’s Tara by accident, literally. Opposites attract, as he loves nature and she doesn’t want to go anywhere near it. Aditya is the quirky host, who has put up his Mahabaleshwar home for rent, so that he can save enough to go and see the Northern Lights. Enter Tara, who is in the midst of a break-up. After several moments of awkwardness, an affectionate bond begins to develop between the two, albeit tentatively. The little story is wholesomely enjoyable and the most endearing part of it is that it has no sermon to preach, or a life lesson to bestow on the viewer.

The story comes alive with the emphasis on nature, be it the hills, swarm of fireflies or the mention of the Northern Lights. It’s nothing entirely out of the ordinary as the two protagonists find love while taking something on slightly daring, a familiar trope in Bollywood.

Sachin Kundalkar’s ‘The Interview’ is rather different and more nuanced. The two characters, Shahana and Rajeev find each other at an interview, both vying for a position at an electronic store in Mumbai. She’s self-assured, while he, a new Malayali in the city, lacks confidence. The devil lies in the details and Neeraj Madhav is the star of this tale, as he effortlessly steps into the small-town character without caricaturing it, bringing Rajeev alive with little mannerisms, such as playing with his wristwatch, and clutching the straps of his backpack.

The idea of the anthology is to infuse that warm and fuzzy feeling in the viewer. It is clear that the stories are not meant to be profound, but just quintessentially sweet. Well, if you are up for sugary and cutesy romances, this just might be the show for you. However, too much of it sweetness might be a bit of an overdose.