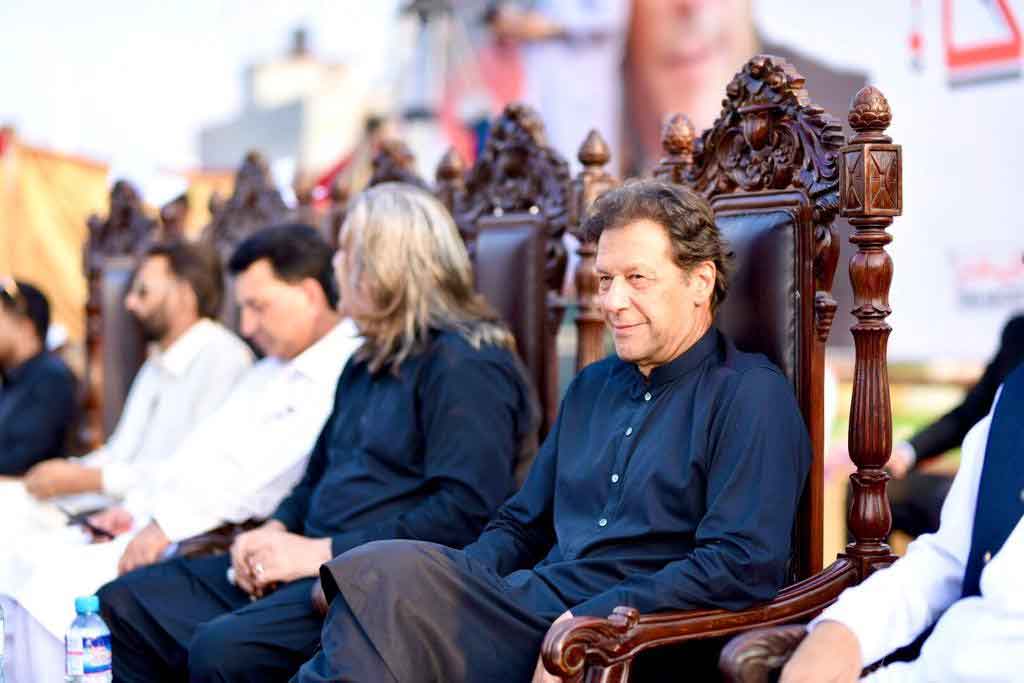 Prime Minister Imran Khan on Friday promised the people of Kashmir that his government will hold a referendum in which they can choose to join Pakistan or become an independent state if they wish. He addressed an election campaign rally in Tarar Khel, he rubbished talk of him “wishing to turn Azad Jammu and Kashmir into a new province of Pakistan”.

“I do not know where all this talk has sprung from,” he said, dismissing any notion of such an idea. “But what I want to make clear now, is that in 1948, there were two United Nations Security Council resolutions which granted the people of Kashmir the right to decide their own future. According to the UN resolutions, the people had to decide whether they want to join Hindustan or Pakistan.

“I want to clarify to all of you today. InshaAllah, a day will come, when all the sacrifices made by the people of Kashmir, will not be wasted. God will grant you that right. There will be a referendum, InshaAllah.

The premier further stated that after the UN mandated referendum, his government has focused to hold another referendum, where the people of Kashmir will have the choice to either live with Pakistan or become an independent state.

PM Imran Khan said the freedom struggle of Kashmiris pre-dates partition and began more than a 100 years ago, when the people stood up time and again against the Dogra government. The Dogra family was a dynasty of Hindu Rajputs who ruled Jammu & Kashmir from 1846 to 1947.

‘PML-N only accepts decisions by their own umpires’

Moving on to the Azad Jammu and Kashmir Legislative Assembly election, due on Sunday, the prime minister said that there is already talk that “there will be rigging”.

He said when he used to play cricket, it was standard practice for countries to have their own umpires, and teams that were fearful of losing against a powerful team, would preemptively raise a hue and cry about losing the match due to the other country’s umpire officiating.

“The Noon League, which I truly believe has never done a single thing with honesty, have begun talk of rigging already. “The government is yours, the staff is yours, the Election Commission is comprised of people of your own choosing, and it is we who will do elections?” he asked the party.

Sharing an anecdote from when he used to play cricket at Lahore’s Gymkhana Club, he said that one day he and his friends noticed a “plump man, seemingly very enthused about playing cricket” visit the club. “That man was Nawaz Sharif,” the prime minister said.

PM Imran Khan said “everything he will go on to say from that point is true”, adding that people who used to play at the club in those days, will back him. The premier said that Nawaz’s cricket “was about as good as his politics”.

“But then he became a finance minister. When he would come to play a match, he would bring his own umpires to the ground: one a deputy commissioner, one a commissioner. Whenever he was out, they would declare it as a no ball. Since then, the Noon League has fallen into this bad habit. For them, good umpiring is only when it is their own man,” PM Imran Khan said.

‘Govt for neutral umpire but Opposition refuses to listen’

The premier said that in 200 years of Test Cricket history, it was Pakistan that brought neutral umpires and the man who was captain at the time “is standing right before you all”. He said at a time when West Indies was the most robust team in cricket, when even losing against them gracefully was a tall order, Pakistan brought neutral umpires to the match, back in 1986.

“And today, there are neutral umpires the world over.” The prime minister said that the government had been asking the Opposition for the past year to come work with the government on electoral reforms “but no one ever comes”.

“We recommended electronic voting machines. What happens is that right after the election ends, the result is out with the press of a button. “You don’t have to worry about going through boxes of votes. Neither is there any fear of the boxes being stolen, nor of double-stamping. This is the marvel of technology. The result is instantaneous,” the premier said.

He said the Opposition “refused to listen and is now crying rigging”.

PM Imran Khan said that one can rest assured that Pakistan “will become a great nation”. He said that over his half-an-hour ride to the rally venue he was surrounded by immense beauty and it made him realise that if even a little bit of effort is put, Pakistan can earn big from tourism.

The prime minister regretted the effects of the war on terror on Pakistan and said it was “this region that suffered the most”. He said after his government came into power, in 2013 and 2018, according to a UN report, poverty registered a significant decline in Khyber Pakhtunkhwa.

The premier said that the province to spend the most on human development was KP. In 2013, there was a coalition government and then in 2018, “the province that never votes for a party twice, had PTI win with a two-thirds majority”.

“So my first and foremost efforts will be geared at reducing poverty in Azad Jammu and Kashmir,” he said. He cited the Ehsaas programme, in which by December, 40% of the underprivileged will have access to subsidised food.

Also citing the Kamiyab Pakistan programme, he said one person of every family will receive technical education and the family will have health insurance worth Rs1 million. In addition, one person will be granted an interest-free loan to start a business. “We have set aside Rs500bn for this programme,” he said.

‘What did they do in five years here?’

“Did anyone go to the United Nations? Did anyone give an interview abroad?

“What to say of all these things, Narendra Modi is instead being invited to weddings. He is bad-mouthing Pakistan, blinding the people of Kashmir with pellet guns and torturing them. And he is being invited to weddings after much begging and pleading,” the premier said. Referring to a book by Indian author Barkha Dutt, he said that it states that Nawaz Sharif “held secret meetings with Modi”.

“He held a secret meeting because he was afraid of the Pakistan Army. Then, he goes to India but does not meet Hurriyat leaders out of fear of angering Modi. “These leaders of yours. Ask them. What did they do in the five years they has been in power here?” he said, as he continued to criticise the PML-N.

He did not spare the mention of PPP either. “And that Zardari. He would think of Kashmir if he had time to spare from counting his money,” the premier said.

PM Imran Khan promised he would continue to raise his voice for the people of Kashmir. “Pakistan will always remain by your side,” he added.

“I wish to salute Ali Geelani who is in jail in occupied Kashmir, and his struggle. And Yasin Malik,” the prime minister said.

He said when there was an earthquake 16 years ago in Azad Jammu and Kashmir, Yasin Malik and he visited the affected areas here. “He had brought money over with him from Kashmir and he distributed it among people here. I will never forget that.”

“Continue to exercise patience, Yasin Malik. InshaAllah, good times will come soon. The entire nation of Pakistan and Azad Kashmir are with you and praying for you and the people of Kashmir.”

“It is our belief. Kashmir will get this right, to decide its own future,” he reiterated, as he concluded his address.