62 Pakistani prisoners brought back from Saudi Arabia by govt 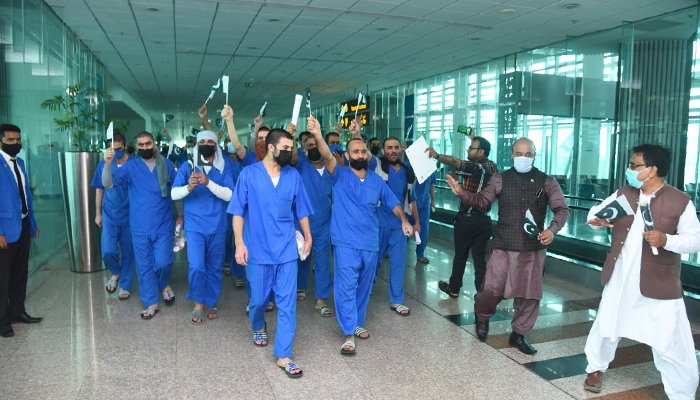 Pakistan brought back 62 prisoners from Saudi Arabia ahead of Eid ul Adha, Prime Minister Imran Khan announced late Tuesday, after the government made special arrangements for their repatriation.

“On my instructions, funds were arranged, and a special flight brought back 62 prisoners from KSA today, so they could be back with their families for Eid,” the premier said in a tweet.

“Helping Pakistanis in prisons abroad and assisting in their return to Pakistan is my government’s commitment to our people,” PM Imran Khan said.

Minister for Information and Broadcasting Fawad Chaudhry, lauding the premier, said no other government had shown compassion for overseas Pakistanis like PM Imran Khan.

“The joy of [these] families is due to the prime minister’s efforts. Thousands of Pakistanis who were facing issues abroad have been brought back,” he said.

During the meeting, the two countries had also signed multiple agreements to enhance bilateral cooperation in the fields of energy, media, prisoners exchange, and others.

An agreement for the exchange of convicted prisoners was also signed between the two countries besides another agreement to counter the crimes.

Fawad, addressing a post-cabinet meeting press conference earlier this month, had said a special aeroplane would be arranged to bring back 85 prisoners from Saudi Arabia.

The information had said the Kingdom had already release hundreds of prisoners in line with Crown Prince Mohammad bin Salman’s promise, which he had made during his visit back in 2019.

“We are trying to bring back several of our imprisoned people — not involved in serious crimes — and the government is making strenuous efforts in this regard,” he said.