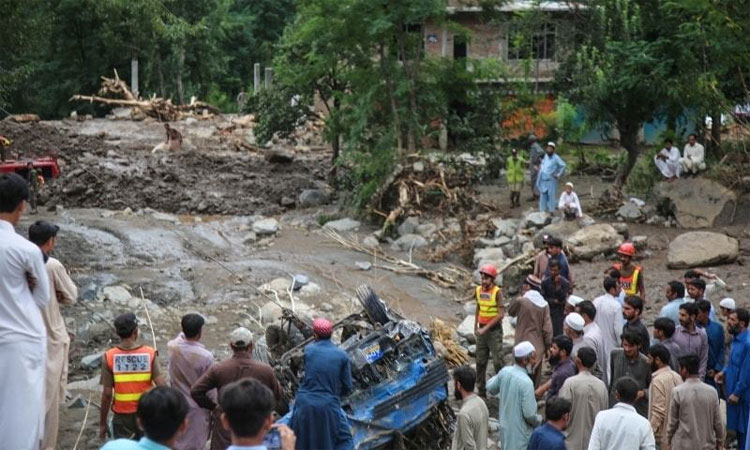 The intermittent rains and flash floods in hills areas claimed six lives in Khyber Pakhtunkhwa while seven persons were injured in different rain related incidents, Provincial Disaster Management Authority (PDMA) reported. It said that during the last 24 to 48 hours two houses in Dir Upper and one each in Karak and Shangla were partially damaged by the rains, adding that PDMA was in constant contact with all district administrations and timely release alerts and warning to all of them regarding rains and flash floods. It said that PDMA control room was working round the clock to deal with any emergency like situation and people can contact PDMA helpline 1700 in case of any incident. The weather in the city of Karachi has turned pleasant ahead of Eidul Adha, with strong winds and light showers. Partly cloudy weather and strong winds are expected in Karachi during the next 24 hours, according to the Meteorological Department. Drizzle and light rain is also expected. The minimum temperature in Karachi was recorded at 27.5 degrees Celsius Tuesday morning, while the maximum temperature in the city is expected to rise between 30°C and 32°C. Humidity is at 82% and winds are blowing from the southwest at a speed of 27 km per hour. The Federal Flood Commission (FFC) has said that all main rivers (Indus, Jhelum, Chenab, Ravi and Sutlej) are flowing normal. According to daily FFC report on Tuesday, owing to good rains in the upper catchments of rivers Indus, Jhelum & Chenab, reservoirs storages have much increased. The combined live storage of Tarbela, Chashma & Mangla reservoirs has risen to 4.697 MAF (34.75% of 13.516 MAF).