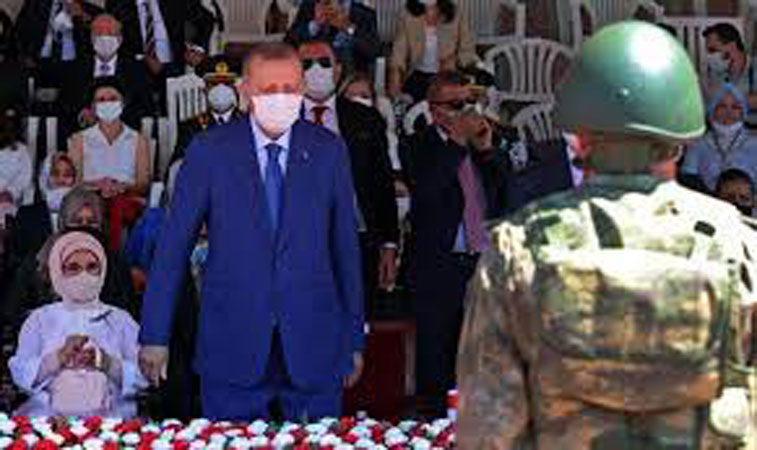 Turkey’s visiting President Recep Tayyip Erdogan insisted Tuesday on a two-state solution in Cyprus, in an uncompromising speech on the 47th anniversary of his country’s invasion that divided the Mediterranean island.

“We don’t have another 50 years to waste,” he told a crowd at a parade in the north of the capital Nicosia, referring to decades of failed UN-led efforts to reunite the Greek and Turkish Cypriot-controlled sectors of Cyprus.

“No progress can be made in negotiations without accepting that there are two peoples and two states with equal status,” he said.

“A new negotiating process can only be carried out between two states… The sovereign equality and equal status of the Turkish Cypriots must be confirmed. That’s the key to a solution.”

To cheers from Turkish-flag-waving supporters, Erdogan accused the Greek Cypriots of “blocking any route to a solution” with a “maximalist approach… that is disconnected from the reality”.

He dismissed a warning earlier this month from European Commission President Ursula von der Leyen that Brussels would “never accept” a two-state solution for Cyprus, which has been an EU member since 2004.

In contrast to celebrations in the north, a military parade and fly-past by Turkish fighters, sirens blasted across southern Nicosia at 5:30 am (0230 GMT) to mark the July 20, 1974 start of the invasion with the landing of Turkish paratroopers.

Turkish troops seized the northern third of Cyprus in response to an aborted coup in Nicosia aimed at attaching the country to Greece.

The island has since been divided between the Greek Cypriot-run Republic of Cyprus and the self-declared Turkish Republic of Northern Cyprus (TRNC), recognised only by Ankara.

On Monday’s opening day of his visit, Erdogan vowed to make “no concession” on Ankara’s efforts to secure international recognition of the TRNC.

“On this island, there are two states and two peoples,” the president told Turkish Cypriot deputies.

“We do not, and cannot make, any concession on that,” he said of Turkish Cypriot leader Ersin Tatar’s push for international recognition.

Tatar, standing by Erdogan’s side on Tuesday, announced “the second phase of our plan to expand” the reopening of the Turkish army-controlled east coast resort of Varosha, which the invasion emptied of its Greek Cypriot residents.

“Life will restart in Varosha,” said the Turkish president, renewing an offer of financial compensation for Greek Cypriots who lost properties in 1974.

Varosha — once the playground of celebrities and dubbed a “Jewel of the Mediterranean” — was left a fenced off ghost town, where former luxury hotels have become overgrown by weeds.

The Turkish army restored public access to parts of the Varosha beachfront last year, since when a main thoroughfare, Demokratias Avenue, has also been cleared.

Workers have raced to spruce up the street in time for a possible controversial second Erdogan visit.

The internationally recognised government in Nicosia has stressed that “Varosha is a red line not to cross”, and strongly condemned Erdogan’s previous visit to northern Cyprus last November.

On Wednesday, Greek Foreign Minister Nikos Dendias is due to travel to Cyprus for talks with President Nicos Anastasiades in the wake of Erdogan’s trip.