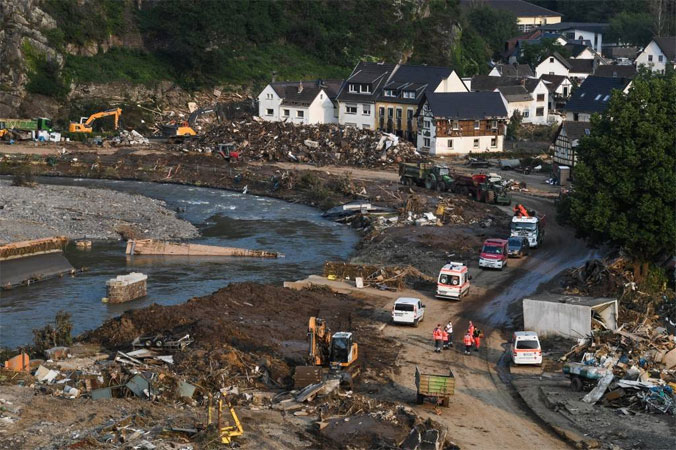 The German government on Monday pledged to improve the country’s under-fire warning systems as emergency services continued to search for victims of the worst flooding in living memory, with at least 165 people confirmed dead.

The west of the country was deluged over two days last week, with torrents of water sweeping away trees, cars and bridges and destroying swathes of housing.

Many victims in Germany were found dead in sodden cellars after attempting to retrieve valuables, while others were swept away by the sheer force of the water.

A total of 117 people are now confirmed to have died in Rhineland-Palatinate state, with 47 victims in neighbouring North Rhine-Westphalia (NRW) and one in Bavaria. At least 31 people also died in Belgium in the floods, and later torrential rain caused havoc in southern Germany and several neighbouring countries.

“We haven’t been to all the houses yet, we must assume that we will find more bodies,” said Rhineland Palatinate’s regional interior minister Roger Lewentz. The number of people missing remains unclear, but Lewentz said authorities have been unable to reach more than a thousand in Rhineland-Palatinate, mainly because of disrupted communication networks. The situation is similar in NRW, where police on Sunday said more than 700 residents initially unaccounted for had since been contacted, but several dozen remain missing.

Government spokeswoman Martina Fietz said the national warning system and mobile phone app Nina had “worked” but admitted that “our experiences with this disaster show that we need to do more and better”.

Armin Schuster, president of the government’s civil protection agency (BBK), called on German radio for sirens to be reinstated in more areas as part of the country’s disaster warnings system.