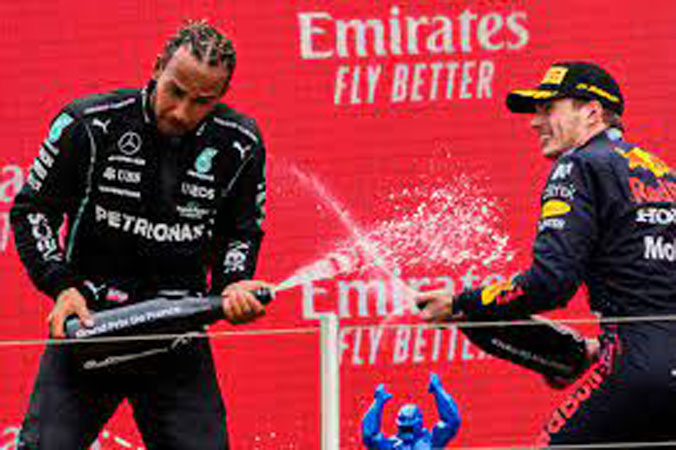 SILVERSTONE: It took a while for Max Verstappen’s Red Bull to be cleared off the Silverstone track at Sunday’s British Grand Prix, but the fallout from his crash with Lewis Hamilton will linger for the rest of the Formula One season. “It always takes two to tango, and these two are not giving each other an inch,” said Toto Wolff, Hamilton’s boss at Mercedes. The stewards agreed, judging Hamilton “predominantly” rather than “wholly” responsible and imposing a relatively light 10-second penalty. The delay to the race allowed Mercedes to repair Hamilton’s car. While he served his penalty in a pit stop and then hunted down leader Charles Leclerc to win the race, Verstappen went for checks.

From the hospital, Verstappen hit back on social media accusing Hamilton of “dangerous” and “disrespectful and unsportsmanlike” behaviour in his celebrations. Red Bull said their driver was given the all-clear to leave “without any major injuries” late on Sunday. Hamilton meanwhile told the pit-lane microphones Verstappen was the problem. “I don’t feel he needs to be aggressive as he is,” he said. “I would never back down from anyone. I will not be bullied into being less aggressive.” The social media barbs quickly took a nasty turn with racist insults aimed at Hamilton which Mercedes as Red Bull united to condemn.

“While we might be fierce rivals on-track we are united against racism,” Red Bull said on social media. “We are disgusted and saddened to witness the racist abuse Lewis suffered.” The accident at over 300 km/h is a sign that the rivalry between Hamilton and Verstappen is growing serious. While ‘Mad Max’ has been in Formula One since 2015, this is the first season he has threatened to wrest the crown from seven-time world champion ‘King Lewis’. “This is a championship where the greatest driver of all time, a seven-time world champion is fighting with a tool that is maybe not as good as the other car, driven by an up and coming star who is trying to make his mark,” said Wolff. “They collided and crashed. We have seen that in days before and with all the great rivalries in history.”

‘He’s too fast’: Horner accused Hamilton of putting “in jeopardy another driver’s safety” and said Hamilton’s victory was “hollow”. “The win doesn’t feel hollow,” replied Hamilton who had cut the Dutchman’s championship lead to eight points. There are 13 races still scheduled in a campaign in which the battle between the two heavyweights has been building since round one in Bahrain. There Verstappen was judged to have gone out of bounds overtaking Hamilton, was ordered to hand back the lead and lost by less than a second.

Verstappen then gradually established ascendancy. He overtook Hamilton on the first corner at Imola on his way to winning the second race of the season. Though Hamilton won in Portugal and Spain, Red Bull then took five straight before the British Grand Prix. At Silverstone, where the home straight has been renamed for Hamilton and a crowd of 140,000 was roaring him on, he came out fighting, determined not to let Verstappen escape. “Once he’s in the lead, he’s too fast, so when an opportunity arises, I have to take it,” said Hamilton. The rivals barely avoided collisions as they battled through the first eight corners but at Copse neither gave in, and Verstappen spun off. Hamilton promised he would not back down next time either. “I will always race hard but always fairly,” he tweeted. The duel resumes in Hungary on 1 August.