* Highlighting perhaps the most important aspect of the festival, Anoushey said, 'Please make sure to remember it's a sacrifice, not slaughter and it takes place in the most humane way' 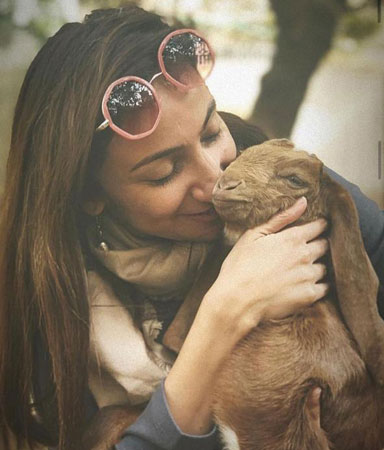 Anoushey Ashraf, known to be an avid animal rights activist, has penned an important note ahead of Eidul Azha in an effort to remind people to remain gentle and kind with their sacrificial animals.

Posting a picture with a young goat in her arms, Anoushey listed down ways to ensure that one makes the most of the important festival while maintaining its sanctity. “…that time of the year where I reach out to those on my Instagram urging them to care, respect and love their animal of sacrifice,” she said before advising people on what to do and what not to do.

Highlighting perhaps the most important aspect of the festival, Anoushey said, “Please make sure to remember it’s a ‘sacrifice’ NOT ‘slaughter’ and it takes place in the most humane way possible.”

She further advised to not let children run the blade on the animals during the sacrifice and to make sure that the blade is at its sharpest so as to ensure that the animal feels minimal discomfort or pain.

Adding on to that, Anoushey shared that it’s also important to not sacrifice one animal in front of another: “It induces severe anxiety in them,” she said, also urging people to not make videos of the sacrifice.

Keeping in line with the spirit of sacrifice and helping the needy, Anoushey also instructed people to distribute the best meat among the needy first.”

“Reflect on the meaning of sacrifice. Be humble about it,” she said, before concluding with a prayer.

“May Allah accept our sacrifices this year. The greatest nations are those that are kind to their animals. Many of them are our food, they fill our hungry bellies. They’re a big blessing. They provide nourishment to us. We have to respect them. We have to be thankful to them.”

Anoushey had earlier also lauded the Turkish people for being kind to their animals.

She turned her last trip to Turkey into a much-needed lesson of hospitality, lauding the country for its animal welfare policies.

“Love how they coexist with animals and understand their right to live and thrive in their environment,” she said, sharing how it’s so important to realise that animals are creations of God as well and deserve to be treated with respect.

“We may be the most intelligent creation of Allah, however, animals are equally His creation too. This planet is as much theirs as it is ours,” she said.