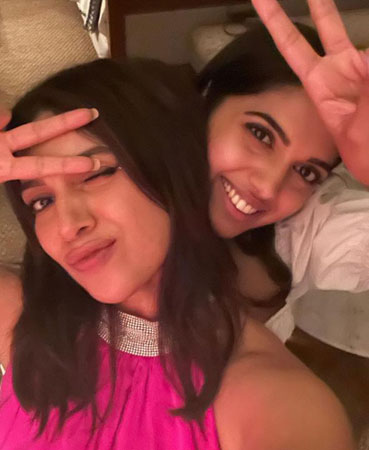 Bollywood actress Bhumi Pednekar turned 32 on Sunday and had a grand celebration at home with her close friends and family.

The next day, she took to Instagram to share pictures and videos from her fun-filled birthday bash. Her sister Samiksha Pednekar was also spotted in the pictures. In the pictures, we see Bhumi donning a black and white bralette with black pants and cutting her scrumptious chocolate birthday cake. The actress all smiles as she spends her special day in the company of her closest friends.

She captioned the post, saying, “The official birthday photo dump 2021”.

Many celebs such as Akshay Kumar, Ayushmann Khurrana, Riteish Deshmukh, and Jacqueline Fernandez took to social media to wish the Bollywood stunner on her birthday.

The stunning actress, who made her debut in the film ‘Dum Laga Ke Haisha’, has established herself as an A-lister in Bollywood now. She’s given her audiences phenomenal performances with films such as ‘Toilet: Ek Prem Katha’, ‘Shubh Mangal Saavdhan’, ‘Sonchiriya’, ‘Bala’, and ‘Pati Patni Aur Woh’. For her film, ‘Saand Ki Aankh’ she had even won the Filmfare Critics Award for Best Actress along with Taapsee Pannu- a notable achievement.

Along with meaningful movies, she’s also been part of social causes and lent her voice to important topics such as environmental protection, global warming, the gender wage gap and women’s reproductive health.