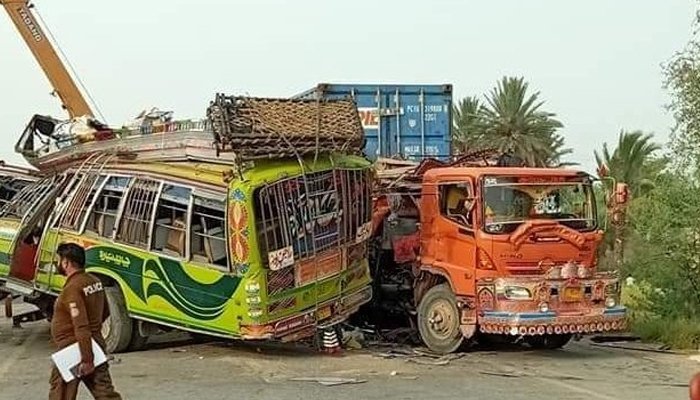 DG KHAN: 25 people have died with and more than 60 injured in Dera Ghazi Khan due to a collision between a passenger bus and a truck.

A bus travelling collided with a truck on Taunsa Road near Jhok Yaro in Dera Ghazi Khan.

The bus was travelling from Sialkot to Rajanpur.

The district emergency officer rescue Dr. Nayyar confirmed that there were 75 passengers on board.

The accident resulted in the injuries of over 60 people. The injured have been taken to the Teaching Hospital.

According to rescue sources, the traffic had been restored and the bus along with the trailer hve been removed from the scene.

The Chief Minister of Punjab, Usman Buzdar, expressed grief for the deaths in the Taunsa traffic accident.

He expressed his condolences and sympathy to the bereaved families.

The Punjab Chief Minister has directed that the injured be provided with the best medical care possible.

He further said he stands with the families of the deceased during this difficult time.

The Federal Minister for Interior, Sheikh Rashid Ahmed  expressed deep sorrow over the loss of 27 precious lives in a bus accident.

In a statement, the federal minister expressed his heartfelt condolences to the bereaved family and prayed for the recovery of the injured persons.

He described the incident as a “catastrophe” for people returning home for celebrating the upcoming Eid-ul-Azha.

“May Allah Almighty raise them to a higher level in heaven and grant courage to the bereaved families to bear the trauma,” he added.