Endorphins fuel an awakening in ‘Endure’ 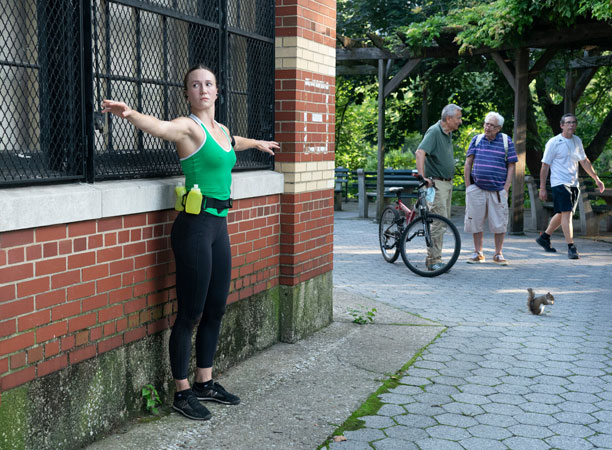 We stood on the grass in Central Park, just inside the Columbus Circle entrance and put in our earbuds.

Our race numbers were already pinned to our clothes and as we waited for the whole group to assemble, we watched people walk and bike, ride and run, along the crisscross paths on a sun-dappled New York summer afternoon.

It was an ideal day for a play in the park and we were an audience. Melanie Jones’s bracing and beautiful “Endure,” a solo show about a marathoner running a race and rebuilding her life, was about to take us on a 5K past the Pond, over and under bridges and across sloping stretches of lawn. This is not a performance you can observe from a fixed point. But the publicity materials state flat out, “Audiences are not required to run.” I, in my long sundress and sandals, decided to trust that.

And the first time our marathoner – played by Casey Howes, a dancer who alternates the role with Mary Cavett – sprinted off down a path, I was the only one who didn’t break into a run behind her. Some were eager, having come dressed in sports gear; others were apparently in a panic that they would be left behind. Walk at a decent clip, keep an eye on the pack and, truly, you will keep up.

Directed by Suchan Vodoor, the expertly paced action is stop-and-start, pausing frequently for interludes that are choreographed or, as with one emotionally intimate scene meant to be watched up close, delicately staged.

And the first time our marathoner — played by Casey Howes, a dancer who alternates the role with Mary Cavett — sprinted off down a path, I was the only one who didn’t break into a run behind her

Whether you walk, run or jog, the text of this 75-minute play comes to you through your earbuds, which the show provides. The inner monologue is spoken by Jones, a Canadian marathoner, who has structured it in 26.2 sections to match the number of miles in a marathon.

Layering the narration with instrumental music by Christine Owman, the recording is rhythmic, incantatory, relentless. It focuses the attention and soothes the mind even as its tale of amped-up competitiveness detours into memories of a painfully broken marriage and the depths of immobilizing depression. In running, our marathoner has found a healing passion, and the kind of defining obsession that makes other people view her as an oddity.

Trailing her through the park, we become fully invested in the perseverance and triumph of this wounded, funny, tenacious woman, played by Howes with nimble athleticism and charismatic grace. There she is, doing a headstand on a hillside while she pedals her feet in the air; wrapping her legs around a lamppost as if it were a tall man’s waist; running and running in a widening arc while we stand mesmerised.

“Endure” is a play about survival and aspiration and excellence, about having yourself for company over the long slog, about building strength in pursuit of a happier life.

It won’t give you a runner’s high, but it is absolutely intoxicating.