Nawaz Sharif, come back and face trial if your hands are clean: Imran 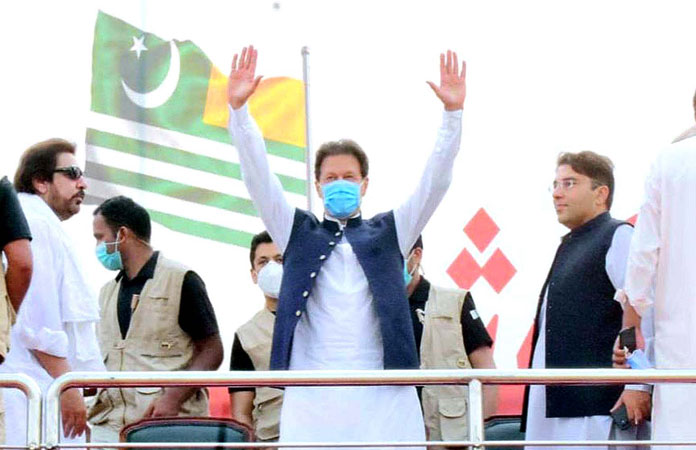 Prime Minister Imran Khan Sunday asked former prime minister Nawaz Sharif and his family members, residing in the United Kingdom, to return home and face trials to prove their honesty as judiciary in the country is fully independent.

“Judiciary in the country is fully independent as Imran Khan did not attack courts or contact judges for seeking favourable judgments. I ask them a question – why are they sitting outside the country if they are honest and truthful, why they fear facing courts?” the prime minister said while addressing two separate public gatherings held in connection with Azad Jammu and Kashmir upcoming general elections on July 25.

The prime minister said even Ishaq Dar, former finance minister, his son, Nawaz’s sons, son and son-in-law of Shehbaz Sharif had been absconding in London to avoid accountability. He said due to independent judiciary and accountability process, even PTI’s ministers were not spared. The courts and National Accountability Bureau (NAB) are free and not under any control, he said. “If these leaders are honest, then why they fear from the justice system,” he added.

He said Nawaz Sharif performed such an acting never staged in Bollywood. “His acting even moved female members in our cabinet who wept upon his health conditions, but after arriving in London, it was a different Nawaz Sharif,” he wondered. “If they did no wrong, then why they have been fleeing?” the prime minister asked the gathering to pose question on polling day to voters of these parties who had plundered the country in the last thirty years. He added such corrupt leadership left the country because they realized that Imran Khan was not giving them any NRO.

The prime minister said that he did not leave the country when politically motivated cases against him were taken up by the Supreme Court. “I faced the trial and submitted each and every evidence because he did not commit any wrong,” he said.

He observed that almost all the poor countries had rulers like Zardari and Nawaz who had been siphoning off their national wealth and sending it abroad. In those countries, the prime minister maintained, there was rule of power swayed by the corrupt leadership and corrupt members of parliament.

The prime minister observed that countries did not become poor due to lack of resources but due to lack of rule of law. “When the rulers consider themselves above the law and roamed the world with NROs, then the countries were ruined, he said, adding, “To bring the powerful dacoits under the rule of law, is the real fight for Pakistan and Kashmir. We have to enforce rule of law and rid the poor from the clutches of injustices.”

The prime minister asked the people to differentiate between the honest and truthful leadership and the others on July 25. He said that he was very concerned about the future of the young generations of the country and wanted the country to become the great one in the world. “I want to make a great nation, so that its green passport should have the respect all over the world,” he added.