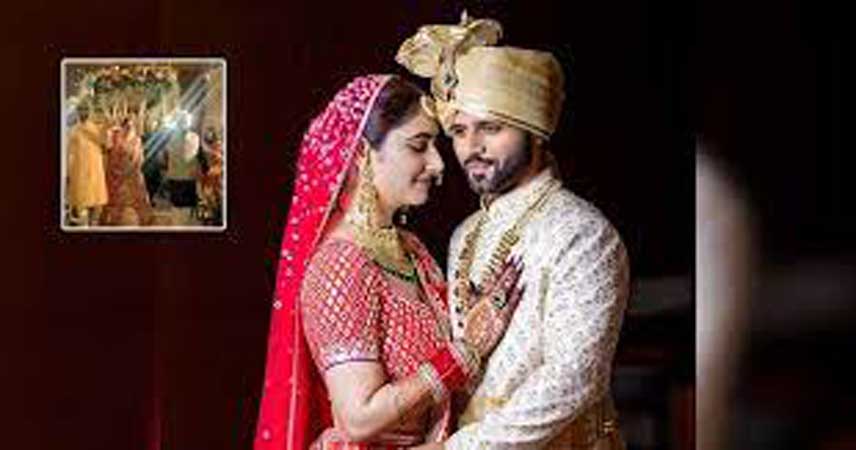 Television’s favourite couple, singer Rahul Vaidya and actress Disha Parmar are ready to start their married life together as they got hitched on Friday (July 16) at Grand Hyatt, Mumbai. Ever since they tied the knot, fans have been flooding social media with their adorable pictures. For their grand wedding, the bride and the groom wore attires designed by renowned fashion designers Abu Jani and Sandeep Khosla. In the pictures, Disha is seen wearing a red ghagra with a pink head dupatta embellished with abla embroidery. The actress paired her outfit with fancy gold jewellery.

On the other hand, Rahul was seen donning an off-white resham and gold zardozi sherwani with an inner kurta churidar. He paired his outfit with juttis covered in heavy embroidery. The couple looked happy as ever on their wedding day as their friends and family cheered them on. In one of the videos, Rahul romantically gets on his knees as she puts on a ring on Disha’s finger and the couple gets showered with beautiful rose petals making the moment even more special.

Rahul Vaidya’s good friend and co-contestant in Bigg Boss 14 Aly Goni was also present at the wedding to support the couple. For the unversed, Rahul Vaidya and Disha Parmar had announced their wedding on Instagram followed by a video where they could be seen exchanging their engagement rings and making it official. Rahul had first confessed his love to Disha on the reality show Bigg Boss 14. Since then, they’ve been together through thick and thin.

Disha Parmar made her debut in the 2012 daily soap Pyaar Ka Dard Hai Meetha Meetha Pyaara Pyaara. She has featured in several ad commercials as well. She was later seen in Woh Apna Sa TV show and received viewers’ love as well.