Terrorists getting active again due to Afghanistan

* ISPR DG says no organized terrorist infrastructure exists in Pakistan after army’s operations
* As long as Afghanistan is peaceful and stable, it does not matter who is in power in Kabul 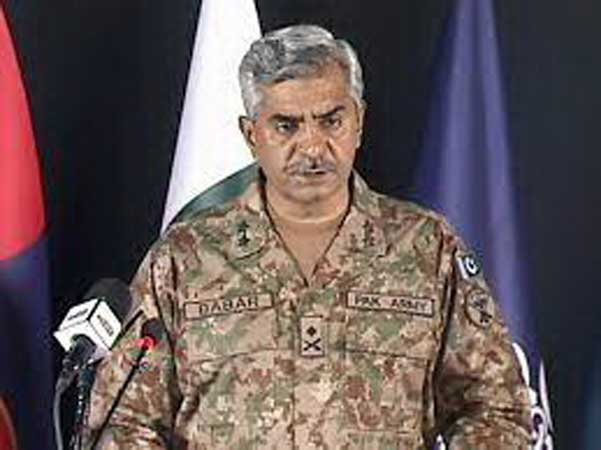 In an interview to a private channel, Major General Babar said the recent terrorist attacks has linkage with Afghanistan’s fresh situation which has frustrated the terrorists. “There is a threat of terrorist sleeper cells becoming active again due to the situation in Afghanistan,” he said. “Pakistan Army is keeping a close eye on the situation in the region and is playing its role with utmost seriousness for the successful outcome of the Afghan peace process,” he added.

The ISPR chief underlined that the security forces have prepared a lot to cope with post-US and allied forces withdrawal in Afghanistan. “We made all preparations and placed all security measures keeping in view the associated threats,” he added.

The ISPR chief was asked if the recent wave of terrorism was connected with the situation in Afghanistan or whether local outfits such as the outlawed Tehreek-i-Taliban Pakistan and Balochistan Liberation Army were behind them. “These recent events definitely have a relation with the situation developing on the other side [in Afghanistan]. As a result of our operations, there is no organised terrorist infrastructure in Pakistan and the leadership of all these networks is sitting across in Afghanistan and they have had the support of [Indian intelligence agency] RAW and India,” he said. “So the recent events you saw show their (terrorists’) desperation,” he added.

While elaborating the security risks, he underlined the security threat including the risk of revival of sleeper cells, restoration of terrorist groups in Balochistan that can have nexus with hostile agencies. “We are very cl0ear and identified those agencies. The recent particular events also occurred due to it and indicates the risk,” he added.

It was presumed prior to initiation of Afghan peace process that peace in Afghanistan would have impact on our side, he said, and mentioned that Pakistan had fought a long, nerve testing war against terror and achieved hard earned success. “The border fencing along Pak-Afghan Border is 90% completed and it has been expedited along Iran Border. Many forts and security posts have been constructed and proper border management mechanism has been placed,” he said. The border fencing was also beneficial for Afghanistan’s security, he added.

Commenting on the border security measures, he said the FC capacity has been significantly beefed up whereas to strengthen the law enforcing agencies, local police and levies has been trained under the supervision of Pakistan Army.

The ISPR DG confirmed that there has been no organized terrorist infrastructure in Pakistan after the security operations done by Pakistan Army. He noted that the fugitive leadership of terrorist groups is based in Afghanistan which was supported by the Indian intelligence agency RAW.

In tribal areas and Balochistan, over 7000 security operations were conducted since May 1, 2021 in which 42 terrorists were killed and also many soldiers of Pakistan Army got martyred and injured during these operations, he added. “Pakistan Army is ready to exterminate all threats to national peace and security. We are after them aggressively and they are on the run and in such aggressive pursuit you bear casualties. Our officers are leading the operations from the front and we are after them and would not let them take any respite,” Major General Babar Iftikhar said.

The ISPR DG also highlighted the sacrifices made by the country in its fight against terrorism. He said over 86,000 innocent lives were lost in the war on terror with US$152 billion dollars economic losses. However, the security forces conducted over 1,300 security operations, cleared over 46,000 sqkm area from terrorist control and some 18,000 terrorists were killed, adding, tonnes of explosives were confiscated in various operations. “I can say with responsibility that no organized terrorist infrastructure is existing in Pakistan,” he reiterated.

During the security operations, he said the security forces along with kinetic measures also made efforts in lawfare domain, however, various measures have been taken and legislation carried out in the country.

“The world has acknowledged the constructive role of Pakistan in the regional peace and stability,” he added.

Operation Radd-Ul-Fasaad’s vision was that use of power was the prerogative of state and Army Chief General Qamar Javed Bajwa took the entire effort under this vision to eliminate terrorism from its roots in the country, he said.

India has huge influence in Afghanistan and they used it as the main purpose of its funding was to develop their roots in Afghanistan and destabilize Pakistan, he noted. “We have also presented dossier in November 2020 and gave evidence of Indian terrorism and clandestine designs against Pakistan,” he said.

He further said there were training camps of RAW in Afghanistan that they used to unite all splinter anti-Pakistan groups. “India is the biggest spoiler in the region,” he said.

Intelligence agencies, he said, always operate and they function in gray zones whereas Pakistan’s peace was mainly relying on peace in Afghanistan. “It will be difficult for India to operate against Pakistan in this case,” he added.

“During the recent clashes between Afghan National Army (ANA) and Afghan Taliban around 40 ANA soldiers crossed towards our side in Bajaur and we gave them a soldierly protocol with food, gifts and handed over to Afghan forces.” he mentioned.