No assets abroad made me say ‘Absolutely Not’: PM

* Imran says opp threatening government only to get an NRO 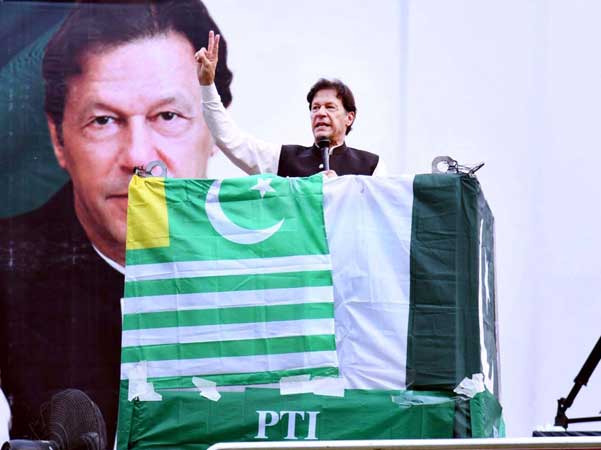 Prime Minister Imran Khan Saturday said those leaders cannot fight the case of the country who have their properties, looted wealth and business abroad.

Addressing a huge public gathering in Bagh, he said he would live and die for Pakistan as he has no stakes outside the country. “That’s why I replied to US ‘absolutely not’,” he said. “On the other hand, the other rulers would have allowed drone attacks inside the country,” he added.

The prime minister during an interview Axios of HBO last month had categorically said that Pakistan would ‘absolutely not’ allow any bases and use of its territory to the US for any sort of action inside Afghanistan.

ImranKhan said countries with rule of law for all its citizens, rich and poor, alike have achieved progress and are prosperous whereas nations with two separate sets of rules have doomed. He said that no nation on earth could aspire to rise unless there was uniform set of laws for all the people.

“Those nations were destroyed who had no regard for rule of law or who had different rules for the rich and the poor,” he said, regretting that in Pakistan, the justice system could not nab the big fish. Amid thunderous applause and slogans by the huge gathering, the prime minister referred to creation of State of Madina by Holy Prophet (Peace Be Upon Him), in which no one was regarded above the law.

The prime minister linking his party’s struggle for the future of the country, young generations and rule of law, declared that the people in Kashmir ‘would never accept, liars, cowardice and corrupt as their leaders’. He said that big looters had gathered in the country as they wanted one thing – NRO. “They want me to forgive them for their corruption and desire one set of laws for the rich and others for the poor,” he added.

The prime minister said in the countries with uniform rule of law, it had never been thought of that a plunderer would ask for pardon.

In sarcastic tone, the prime minister (in veiled reference to Nawaz Sharif) said the Supreme Court had declared him guilty, a court of law had convicted and sentenced him, but the former prime minister produced fake medical documents to flee the country. “No such acting had ever been performed in the Bollywood,” he added.

The prime minister opined that a country with begging bowl could not stood on its feet. He said under Pakistan Tahreek-e-Insaf government’s the country would be able to extend financial support to the poor countries.

The prime minister said in the state of Madina, Holy Prophet (PBUH) made it clearly that previous nations were destroyed as they had no regard for the rule of law. “Our Holy Prophet (PBUH) also inculcated a spirit of self-respect and ego in the downtrodden people who later rose to prominence in the world,” he said, adding they had not influenced by the two mighty powerful Roman and Persian empires. He said the nations were formed on the basis of their ideologies. The people living in a country touched heights when they preferred their collective ideology over individual interests.

The prime minister said founder of Pakistan Quaid-e-Azam Muhammad Ali Jinnah had strived for forty years of his life for those principles and emphatically pronounced an ideology, which became a basis for the nation. These were the principles dreamt by Allama Iqbal. He said for the first time in the world’s history, Riasat-e-Madina took responsibility of the weaker segments of the society including poor, widows, orphans. He said his government was also taking similar steps for the realization of a welfare state.

He said the Khyber Pakhtunkhwa government had given health cards to all its citizens whereas Punjab province would extend such facility to all the residents by the end of this year. By the end of this year, the health insurance would be given to all residents of Azad Jammu and Kashmir, he added. Under such facility, each family would get free of cost medical treatment worth Rs1 million, he further added. For the first time in the country’s history, the prime minister said, they facilitating provisions of loans by the banks, so that the poor people and low-income groups could afford their own houses through easy instalments.

The prime minister also informed that by the end of the year, they would be launching a new programme, ‘Kamyab Pakistan’, under which the poor families would get interest free loans for starting their small business. Each member in a family would get such facility besides, technical education would be imparted to them especially to womenfolk who could earn their livelihood while sitting at homes due to use of latest technology.

The prime minister said his government was emulating the model of Riasat-e-Madina in which the poor people were lifted, a model also followed by China.

The prime minister while enumerating the steps taken for the welfare state, referred to setting up of Panah Gah, where the lodging and dining facilities were provided free to the labourers and daily wage earners, so that they could save their daily income and send them back to their families.

The prime minister saluted the brave struggle of the Kashmiri people against unabated Indian brutalities and oppression in the Indian Illegally Occupied Jammu and Kashmir (IIOJK).

He said that people in IIOJK were facing inhuman cruelties while offering unprecedented sacrifices for their legitimate rights like that of Burhan Wani. “The whole world is witnessing your great sacrifices and spirit and praying for you,” he maintained. The prime minister said Indian prime minister Narendra Modi through illegal and unilateral steps of August 5, had never thought, that spirit of Kashimiri people could be bogged down.

The RSS-BJP ideology, he said, posed a real threat to India itself. The ruling junta did not recognize all the minorities living in India as their citizens.

The prime minister assured that he would continue raising his voice for their rights at all the global fora.

He said Pakistan and Kashmir were tied with each other upon that ideology which had been a basis for the creation of Pakistan.

On the occasion, Minister for Foreign Affairs and Vice chairman PTI, Makhdoom Shah Mahmood Qureshi said that prime minister Imran Khan had raised the issue of IIOJK vociferously at all the world fora. Citing political opponents’ hollow claims, he reiterated that there would be no compromise on the issue of Kashmir.

Qureshi said that all the Kashmiris were now looking towards one personality – Imran Khan, who would secure their legitimate rights, he added.

The PTI’s vice president further expressed his wonder that the PML-N had the government and authority in AJK, but they had fears because of their corruption and poor performance. The PPP now belonged to Zardari and Bhutto’s ideology had been buried, he added.

Qureshi said no one could create hurdles in the way of change which would dawn upon Kashmir on July 25.

Minister for Interior Shaikh Rashid Ahmed said when prime minister Imran Khan spoke at the UN, the world listened to him as ambassador of Kashmir.

About political opponents, he said now these people had arrived Kashmir asking for votes who had forged friendship with Modi. He said Imran Khan was the only ray of hope for the people of Kashmir.