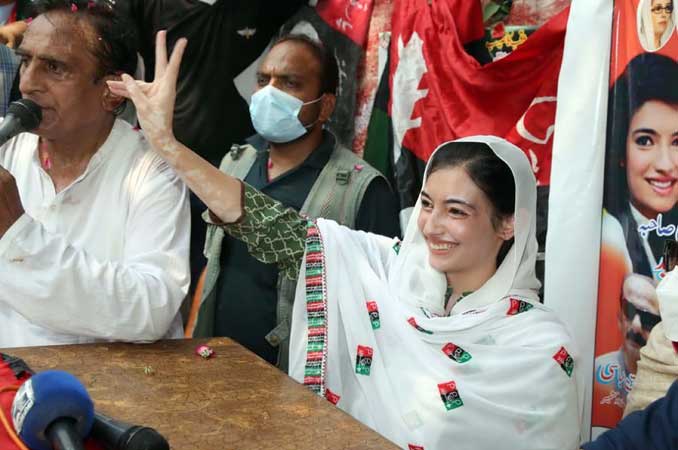 Pakistan People’s Party (PPP) leader Aseefa Bhutto on Saturday said her party has never refrained from sacrificing lives for the sake of democracy, adding that they are ready to sacrifice for the democratic rights of Kashmir as well.

“We have always been standing by Kashmir and will continue to do so,” she said while addressing party workers at Kohala bridge, and urged everyone to vote only for ‘arrow’ on July 25.

Aseefa Bhutto said PPP’s relation with Kashmir goes back to three generations. “I have come to Kashmir for the first time,” she said, adding that PPP has always stood with the people of Kashmir.

Aseefa Bhutto claimed to have inherited love for Kashmir, saying, “Arrow is a sign of employment, arrow is a sign of Kashmir.” She also urged people to come out on July 25 and vote for her party.

Meanwhile, PPP Central Information Secretary MNA Shazia Atta Marri said that the situation in the country has worsened since the day the government of Imran Khan was imposed on the country. “The selected Prime Minister is not aware of the country’s critical issues and has become an expert on other countries’ issues,” she said.

In a statement issued on Saturday, Marri said that federal ministers have nothing to say and do for the country’s people but can only vituperate the opposition. She said that people of Pakistan have lost their peace of mind due to this incapable and incompetent government’s anti-people policies. The people of this country are suffering because of rising oil and electricity prices, but the government isn’t caring about them, she said, adding that the federal ministers of PTI government only hold press conferences every day and abuse the opposition leaders but never have made any announcement for relief of the people.