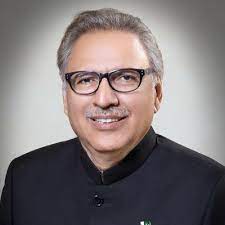 “A brilliant future lies ahead for Pakistan if it timely jumps on the ‘technological bandwagon’, which is expected to ensure an exponential progress by 30 times,” the president said in an interview with Islamabad Security Dialogue.

President Alvi said he strongly believed that there was no limit to Pakistan’s economic growth after it gets a stronghold in domains of cyber security, artificial intelligence and computing.

He said Pakistan was capable of meeting the challenges of cyber defence, adding that “with right direction, even small countries become unicorns within less than a decade”.

He expressed optimism that Pakistan, in the next decade, would turn into a “geo-economic hub” and become one of the strongest countries in the world in terms of economic stability.

Dr Alvi pointed out that Pakistan’s earlier geostrategic strategy had been “imposed” on it in view of India as a belligerent neighbor, committing atrocities in Jammu and Kashmir for the last seven decades.

He regretted that the United Nations had still not conformed to its promised resolutions on Kashmir and the world ignored India’s “so-called peaceful” nuclear capability besides its recent episodes of illegal uranium sale.

He said the foreign media did not pick up the real issues concerned with Pakistan, but maintained a stereotype understanding about the country. Pakistan, he said, for long suffered the imposition of a security situation regarding the Soviet invasion of Afghanistan followed by the United States and the presence of Osama bin Laden in Afghanistan.

The president said the situation led to Pakistan’s hosting of over 3.5 million Afghan refugees, which he said, was an exemplary gesture of kindness contrary to the “champions of human rights” that refused the migrants to let them drown in Mediterranean Sea.

“Pakistan has done wonders to its own psyche with this natural moral strength. The nations are built not from resources, but by their intellect, smartness and strength of character,” he said.

President Alvi said Pakistani nation had rose  resilient after defeating terrorism and suffering 70,000 casualties and an economic loss of $130 billion.