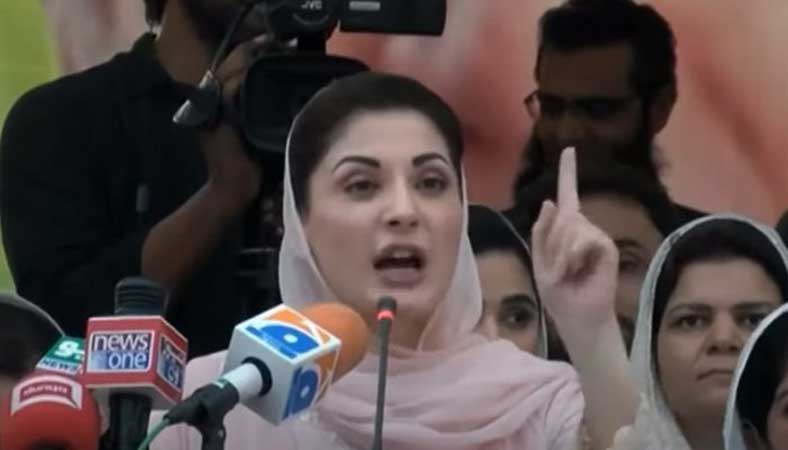 Addressing an election rally in Bhimber area of Azad Jammu and Kashmir (AJK), the PML-N vice president claimed that false cases were registered against Nawaz Sharif for removing him from premiership. “Nawaz Sharif is in London but they will have to steal the election for defeating him. These people lost even by staying on the same page,” she further said. “I am a daughter of this soil who loves the armed forces of Pakistan. Some people did unfair to us with cruelty, however, I have left this matter to Allah Almighty,” she maintained.

Maryam said that Nawaz Sharif removed the darkness of load shedding from the country, adding that today people have no electricity but receive huge amounts in bills. She said that the prices are increasing regularly due to Imran Khan’s ‘incompetence and corruption’. “Prices of sugar, ghee and flour have also gone up even at Utility Stores,” she added.

Meanwhile, PML-N Secretary Information Marriyum Aurangzeb has said that Imran Khan has proven to be a liar and a coward with zero integrity.

In a statement, she said Imran Khan levelled baseless allegations against Shehbaz Sharif in 2017 and had been on the run ever since. “Imran does not have the honour, guts or courage to face the courts and stand by his own words,” she added.

The former information minister said Imran Khan has once again failed to submit response in court because he has no answer to his baseless accusations and allegations. “Imran and PTI have got used to being embarrassed by the courts because every single one of their false accusations has fallen flat on its face and their politics of allegations and accusations has been buried by the courts and the people of Pakistan,” she added.