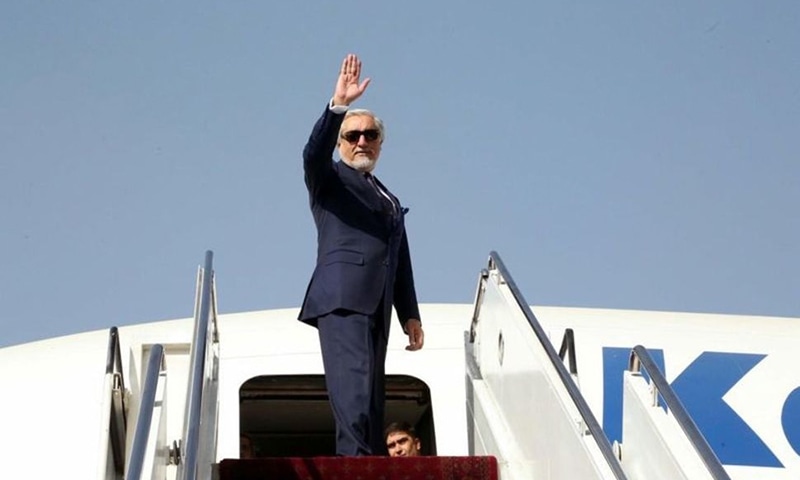 A delegation of Afghan political leaders led by top peace official Abdullah Abdullah left for Qatar on Friday to attempt to breathe life into stalled talks with the Taliban as violence escalates around the country.

Abdullah, head of the country’s High Council for National Reconciliation and former government chief executive, said that even as conflict rose and districts toppled to the Taliban insurgents, peace needed to be sought at the negotiating table.

“We hope that the Taliban side will see this as an opportunity and know that there will be no peace with continued capturing of districts,” he said at Kabul’s airport before departing.

“The result of peace can only be achieved at the negotiating table (and) despite all the pain that our people are suffering today… we believe there is still a chance for peace.”

Clashes between the Taliban and government forces have intensified as US-led international forces have been withdrawing. The Taliban have encircled several provincial capitals, and captured several districts and border crossings in the north and west.

Meetings in Qatar’s capital between Afghan government and Taliban negotiators have been taking place in recent weeks but officials have cautioned there are few signs of substantive progress as time runs out before foreign troops withdraw by September.

Pakistan’s foreign ministry said on Friday that it had postponed another highly anticipated meeting on Afghan peace that had been scheduled to begin in Islamabad this week with Afghan leaders. It said it would set new dates after next week’s Eid religious holiday.

Clashes continued around Afghanistan, including in southern Kandahar province where the Taliban on Wednesday captured Spin Boldak, a crucial area along the border with Pakistan. Officials described heavy clashes and both sides claimed to be in control of the area on Friday.

Reuters journalist Danish Siddiqui was killed on Friday while covering a clash near the border crossing, an Afghan commander said.