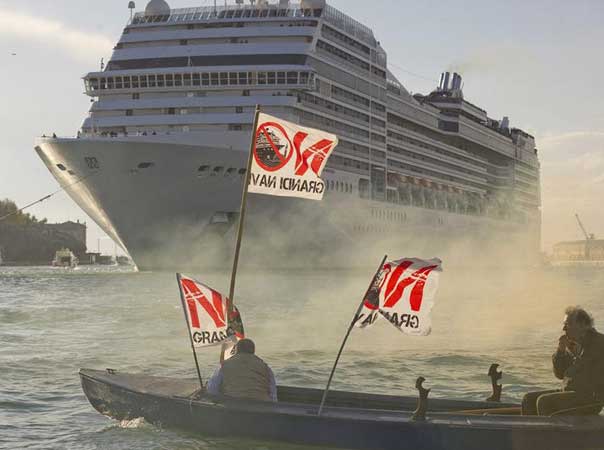 After years of delay, Italy has banned large cruise ships from sailing into the centre of Venice. While they bring in much-needed tourists, there are concerns the massive ships are damaging Venice’s fragile buildings and the environment.

From August 1, ships with a gross weight of more than 25,000 tons, those longer than 180 metres (590 feet) or with an air draft of over 35 metres (115 feet), or whose emissions contain more than 0.1 percent sulphur, are to be banned from passing in front of Saint Mark’s Basilica or up the Giudecca Canal in central Venice. They will have to dock instead in the industrial port of Marghera. Smaller boats that carry 200 passengers or less can continue to dock in the heart of the canal city.

Waves and pollution generated by huge cruise ships erode shorelines, change currents and redistribute toxic sediments, according to a 2019 study published in the journal Nature. Giant liners and their large wakes further stress an ecosystem “already shown to be susceptible to natural and anthropogenic processes such as sea level rise and subsidence”, the authors said.

Venice is also vulnerable to high tides that regularly flood it and weaken building foundations. Groundwater pumping by heavy industry until the 1970s aggravated its problems as well.

The ban on giant liners came just days before a meeting of the UN’s cultural organisation UNESCO, which has suggested Venice might have to be added to its list of endangered heritage sites. Despite the new law, the canal city remains a question mark on the World Heritage Committee’s agenda due to other factors, from flooding to the fall-out from intensive tourism, which has seen most of its historic residents de-camp.

The port of Marghera, at the entrance to the lagoon, now has to be revamped. Temporary docks are to be built in the coming months, and shuttles set up so passengers can reach the historic centre. Offshore approach platforms are to follow. A call for tenders has been issued, but contracts are not expected to be awarded until June 2023.

Cruises bring a vast amount of money into Venetian pockets. There were 497 port calls here in 2019, disembarking or embarking over 1.6 million people, before the pandemic stopped traffic in its tracks. A timid revival last year resulted in just over 5,500 passengers from 10 port calls, according to research firm Risposte Turismo. Before the pandemic, cruises generated a yearly average of 150 million euros ($175 million), mostly from tourists.