* Economic issues, firstly, he has quoted various epochs that become key reasons in the economic downfall of a state 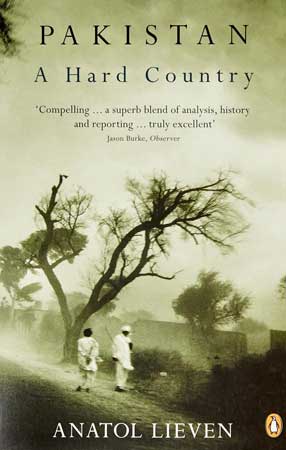 Pakistan a Hard Country; the most insightful text in a pared-down prose from an inquisitive pen of an inimitable journalist Anatol Lieven.

Undoubtedly, he has keenly observed Pakistani society with journalistic eyes rather than Occidental lenses. There are many traces that one can gauge from sympathetic statements that he supposed to utter for the oppressed class and his ironic tone for the oppressors as well. The book is divided into four parts. Land, People & History is a thesis statement, second segment is all about the governance of Pakistan and third part paints a perfect picture of provinces. While last segment, The Taleban, it is an anti-thesis and widening gyre of the text, synthesis is also there in conclusion. Writing on external and internal affairs of states is not an easy task. Lieven proclaims the same in the beginning of a text that the central theme of his book is ‘Janus-faced.’ In first part, Land, People and History, writer sheds light on several weaknesses of Pakistan which has separately repeated in second segment as well.

Economic issues, firstly, he has quoted various epochs that become key reasons in the economic downfall of a state. For instance, 1970s Bhutto’s nationalisation programmes, 1990s US sanctioned for Pakistan’s nuclear programme. However, he has come out with bright figures that from Musharraf era to 2009 Pakistan’s GDP stood at $167 billion.

Secondly, kinship is central to the weakness of the Pakistani state. In fact, the author has overlapped corruption with the kinship. It is an undeniable fact that not only the influence of relations terribly affects the institutes but also badly damages an image of a state. Therefore, Lieven claims, “Much Pakistani corruption is the result not of a lack of values but of the positive and ancient value of loyalty to family and clan.”

Secondly, kinship is central to the weakness of the Pakistani state. In fact, the author has overlapped corruption with the kinship. It is an undeniable fact that not only the influence of relations terribly affects the institutes but also badly damages an image of a state

Thirdly, there is a minimal role of judicial system in Pakistan. As for as writer’s point of view is concerned, he has declared that the judicial system is one of the most flawed institutions in Pakistan, and consequently loathed by the masses. However, Pakistan is not like Somalia where the absence of law and order make it a failed state. One can say, there are direly needed reforms in the judicial system, like the author himself indirectly pays heed to the uttermost point on medium of language. He asserts;

“The lawyers can speak to the judge in either English or Urdu, but the lawyers make their arguments in English and the judge delivers his judgment in English – so that unless someone translates for the accused, they will most of the time not know what is happening to them.”

He has mockingly portrayed an image of Pakistani lawyers too and his quite ironic tone on their attire in the hottest weather.

Fourthly, there is an excessive role of pro-religious people in Pakistani politics. A number of renowned religious figures Lieven have illustrated who influence political stature in multitudinous of ways. He opines, “Politically speaking, pirs behave in the same way as the great majority of other politicians. They use their network of influence to gain patronage and protection of their followers.”

So, in his words that the pirs and shrines are therefore an obstacle to modern reform democracy and development in Pakistan.

Fifthly, military interventions – Shuja Nawaz has mirrored this ambiguous conflict in a quite moderate way in his article where he quotes the words of former Army Chief, General Jehangir Karamat;

“Whenever there is a breakdown in… Stability, as has happened frequently in Pakistan, the military translates its potential into the will to dominate, and we have military intervention followed by military rule.”

It is natural, when a naive interferes in the matters of defence, their protectors will surely break the ice in order to show them their limits. In a way, Lieven propagandistically and repeatedly demonstrates an established fact that the only institution which has succeeded to some extent in resisting this in the name of state loyalty and professional meritocracy is the army.

In third portion of ‘Provinces’, the common narratives used to utter by indigenous people are strikingly reported by Anatol Lieven. The utterances are undoubtedly attractive and magnificent but they are from heart and soul and while documenting state matters, the use of emotions seems futile. So, they are fact less and biased narratives of ignorant people who do not know the worth of their state and its matters where their every word directly or indirectly impacts on it. Besides, the documentation of revenue generation of provinces is impeccably enumerated.

Last part, The Taleban; it is widening gyre of the entire text, his untiring labor undoubtedly makes it research-oriented book. It seems as though the writer penned down for the only ground. Complex relations with US and Afghanistan are exclusively reported. There is no shadow of doubt behind the fact that some incidents leave the darkest stains on the transparent role of states that cannot be easily tarnished. Similarly, 9/11 event becomes an incident of darkness in the history of Pakistan. In addition to this, Ayesha Jalal rightly quoted the words of Pakistani-born American in her article.

“all Pakistanis are not terrorists, most acts of terrorism in the contemporary world inexorably carry the Pakistani paw print”

Neither Lieven narrates new narrative of Taleban nor does he predict Pakistan as a taleban-free state, but his reported speeches matter in the entire text. He concludes, “terrorism and local unrest will be with Pakistan for the foreseeable future.”

On a concluding note, the book undoubtedly would pave new ways in order to comprehend the Janus-faced state. The way he has documented various people’s narratives is one-of-a-kind inclusion in history book. Moreover, imperial powers that monitor and moderate colonial countries are explicitly explored; one can solely quote him to show the utmost influence of imperial powers on former colonial states. So, now it is up to the people of Pakistan whether they will be Eliot’s patient or Auden’s actioned man whom neither drug nor isolation can cure.

The article has been written and contributed by Meer Mansoor who is a blogger and former student at National University of Modern Languages. He can be reached at mangriogul@gmail.com