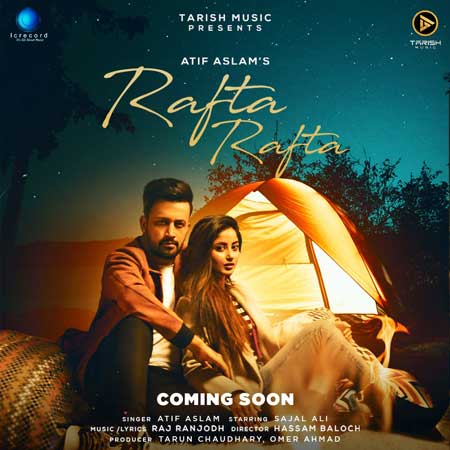 Without making his fans wait any longer, Atif Aslam has finally unveiled the first glimpse of his upcoming music video titled Rafta Rafta. In a poster that is released on Instagram, the multifaceted artist is pictured alongside Sajal Aly as his female lead in the music video. Set against the picturesque backdrop of the night sky in Skardu, the image shows Atif and Sajal sitting close to each other on a camping trip, hinting at oodles of romance and chemistry. While Atif has previously worked with some incredible artists, this is the first time Sajal is sharing the screen with him. Released under the label of Tarish Music, Rafta Rafta is directed by Hassam Baloch, jointly produced by Tarun Chaudhary and Omar Ahmed while the music and lyrics are done by Raj Ranjodh. The release date of the music video is still under wraps but fans are keeping their eye out on social media for more updates.