* Price of petrol goes up by Rs 5.40 per litre, diesel by Rs 2.54 per litre
* Gill says PM gave public ‘huge relief’ by not raising prices based on recommendations of OGRA 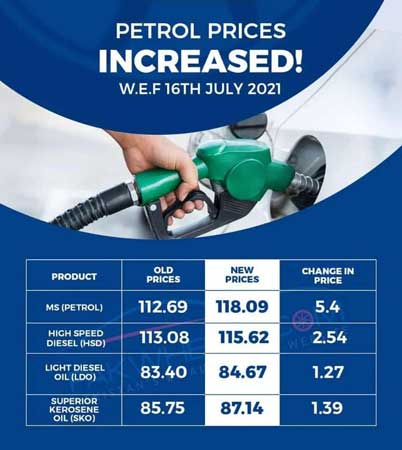 The prices of petroleum products in Pakistan took a big jump on Thursday as the federal government increased the price of petrol by Rs 5.40 per litre and that of high-speed diesel (HSD) by Rs2.54 per litre.

The change was shared by Special Assistant to Prime Minister on Political Affairs (SAPM) Shahbaz Gill, who said that the prime minister had decided to give the public ‘huge relief’ by not raising prices based on the recommendations of the Oil & Gas Regulatory Authority (OGRA). “Prime Minister [Imran Khan] went against OGRA’s recommendation and approved Rs5.40 increase in petrol price keeping in mind public interest,” the special assistant said.

Gill disclosed that OGRA, in view of rising petroleum prices in the international market over the last few months, had recommended that the price of petrol be increased by Rs11.4 per litre. “Contrary to Ogra’s recommendations, the prime minister only approved an increase of Rs5.40 per litre keeping in view public interest,” he tweeted. The government would ‘endure the burden’ that would arise due to not increasing the prices in line with OGRA’s recommendations and ‘giving the public maximum relief’, he added.

Minister for Information and Broadcasting Chaudhry Fawad Hussain said that country’s petrol prices were currently lowest in comparison to other regional countries. In a tweet, he said that the government had been left with no option but to enhance the price due to persistent increase in the global market. Sharing comparison of petrol prices of regional countries in Pakistan rupee, he said Pakistan had Rs 118 per litre, Bhutan Rs 146, Sri Lanka Rs 147, Bangladesh Rs 167, Nepal Rs 172, China Rs 189 and India Rs 220.

The government had to reduce its tax on petrol and diesel to allow a minimum increase.