Taliban offer three-month ceasefire in return for release of prisoners 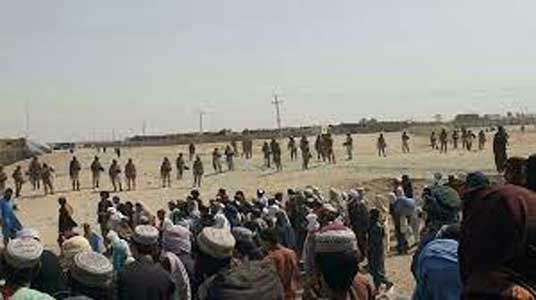 An Afghan government negotiator on Thursday said the Taliban had offered a three-month ceasefire in exchange for the release of 7,000 insurgent prisoners, as the militant group continues a sweeping offensive across the country.

“It is a big demand,” Nader Nadery said, adding that the insurgents have also demanded the removal of the Taliban’s leaders from a United Nations blacklist.

A senior insurgent leader had said on Tuesday that the Taliban do not want to battle government forces inside Afghanistan’s cities and would rather see them surrender.

The hardline group has swept through much of the north as foreign troops complete their withdrawal, and the Afghan government now holds little more than a constellation of provincial capitals that must largely be resupplied by air.

As security deteriorates, France on Tuesday became the latest country to call on its citizens to leave – offering them a last flight out of Kabul, free of charge, on Saturday.

Earlier, the head of a Taliban commission that oversees government forces who surrender had urged residents of Afghanistan’s cities to reach out to them.

As foreign forces wind up their withdrawal – due to be completed by August 31 – the situation on the ground is changing rapidly.

The top US general in Afghanistan relinquished his command on Monday at a ceremony in the capital, the latest symbolic gesture bringing America’s longest war nearer to an end.

The pace of the pullout – and multiple offensives launched by the Taliban – have raised fears that Afghanistan’s security forces could be swiftly overwhelmed, particularly without vital US air support.

Local Afghan leaders and the Taliban have agreed on a ceasefire in the western province of Badghis, its governor told AFP Thursday, days after the insurgents launched a major assault on the provincial capital of Qala-i-Naw.

“The ceasefire between Afghan security forces and the Taliban began at around 10:00 am today. The ceasefire was brokered by tribal elders,” Badghis governor Hesamuddin Shams told AFP, adding the truce had no specific time frame.

Soon after capturing a key border crossing into Pakistan, scores of Taliban fighters rampaged through the town, looting homes and seizing vehicles of government officials who had fled, according to local residents.

“The Taliban are roaming on motorbikes and cars through the bazaar,” Sanaullah, a resident of the Spin Boldak border town along the frontier with Pakistan, told AFP by telephone on Thursday.

“Homes of government officials are being looted… It is like they were waiting for two decades to seek revenge.”

A spokesman for the Taliban said the claims were not true.

The insurgents took control of the town that provides direct access to Pakistan’s Balochistan province on Wednesday, the latest in a string of border crossings the insurgents have seized in recent weeks.

Taliban supporters posted photos they said were from the Afghan side of the border, showing insurgents installing the movement’s flags on top of buildings.

Others were seen in abandoned homes, with furniture and clothes strewn everywhere, including the house of former anti-Taliban police commander General Abdul Raziq, who was assassinated in the southern province of Kandahar in 2018.

It was not possible to independently verify the images.

The Taliban fighters have been accused of looting Afghan army and police bases during their assault across the country in recent weeks.

In other seized towns, residents have reported that the Taliban swiftly returned to their harsh interpretation of Islamic rule putting restrictions on girls’ education and stopping women from leaving their homes.