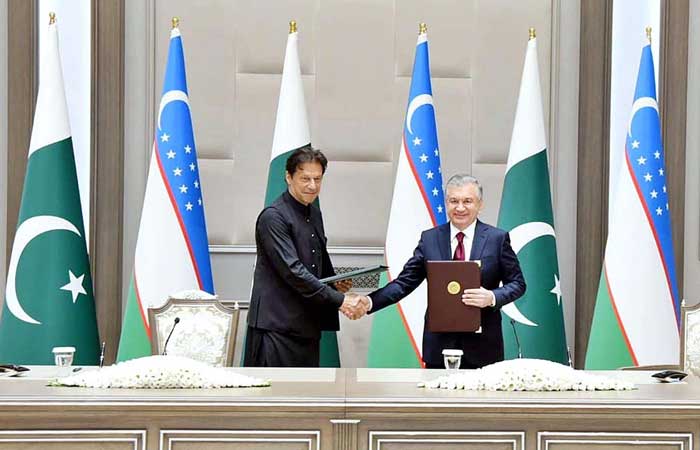 Prime Minister Imran Khan on Thursday said with Pakistan and Uzbekistan sharing the same objective of lifting their people out of poverty, increased and strong trade and economic relations would be mutually beneficial and a win-win for the two sides.

“Uzbekistan can benefit from Pakistan’s geo-strategic location, a market of 220 million people and providing access to the Middle East and Africa, While Pakistan can have access to the Central Asian states through Uzbekistan, an important country of the region,” he remarked.

The prime minister expressed these views while addressing a joint press conference with Uzbek President Shavkat Mirziyoyev after holding an in-depth discussion on various issues of mutual interest.

Lauding the passion of President Shavkat Mirziyoyev on a railway project from Pakistan to Uzbekistan through Peshawar, Kabul and Mazar-e-Sharif, the prime minister said it was the very project for regional connectivity and assured that his government would fully pursue and push for its realization.

He said during the talks, the two sides also discussed the situation in Afghanistan. As the brotherly people of Afghanistan were suffering from hardships for the last 40 years, now there should be peace and peaceful settlement, he added.

He said the two sides also agreed to arrange a meeting of foreign ministers of Pakistan, Uzbekistan, Tajikistan, Iran and Turkey before a summit level meeting to discuss the Afghan situation and find a way to avoid civil war in the brotherly country,

President Shavkat Mirziyoyev, in his remarks, said Uzbekistan wanted to have ro

bust political and economic relations with Pakistan, which was a strong country in South Asia. He said since Uzbekistan and Pakistan had a strong and historic relationship, rooted in similar values and culture, the visit of Prime Minister Imran along with a large delegation would help further strengthen the ties.

The Uzbek president also expressed his pleasure over the signing of a Joint Agreement on Strategic Partnership as well as the trade agreements worth US $ 500 million signed between the two private sector businessmen.

He said the realization and implementation of railway project from Uzbekistan to Pakistan would strengthen connectivity for the mutual benefit.

President Mirziyoyev, while highlighting the importance of people-to-people contacts and cultural exchanges, said the people of Uzbekistan were keen to see the historical mosques and places in Lahore.

They also witnessed the signing of agreements and memorandums of understanding (MOUs) for cooperation in the areas of transit trade, military education, simplification of visa procedures for businessmen and tourists, cultural exchanges, and tourism.

Pakistan and Uzbekistan on Thursday signed a number of bilateral agreements and memorandums of understanding (MOUs) to strengthen cooperation in diverse areas, including trade, culture, tourism and ease of visa procedures.

The agreements and MOUs signed included Protocol on the Exchange of Pre-Arrival Information on Goods moved across the State Border; Agreement between Uzbekistan and Pakistan on Transit Trade (AUPTT); Protocol on Cooperation in the Field of Military Education; Agreement on Simplification of Visa Procedures for Businessmen and Tourist Groups; MOU between Foreign Service Academy of Pakistan and University of World Economy and Diplomacy of Ministry of Foreign Affairs of Uzbekistan; Cultural Exchange Program 2021-2026; and MoU on Matters relating to Tourism.