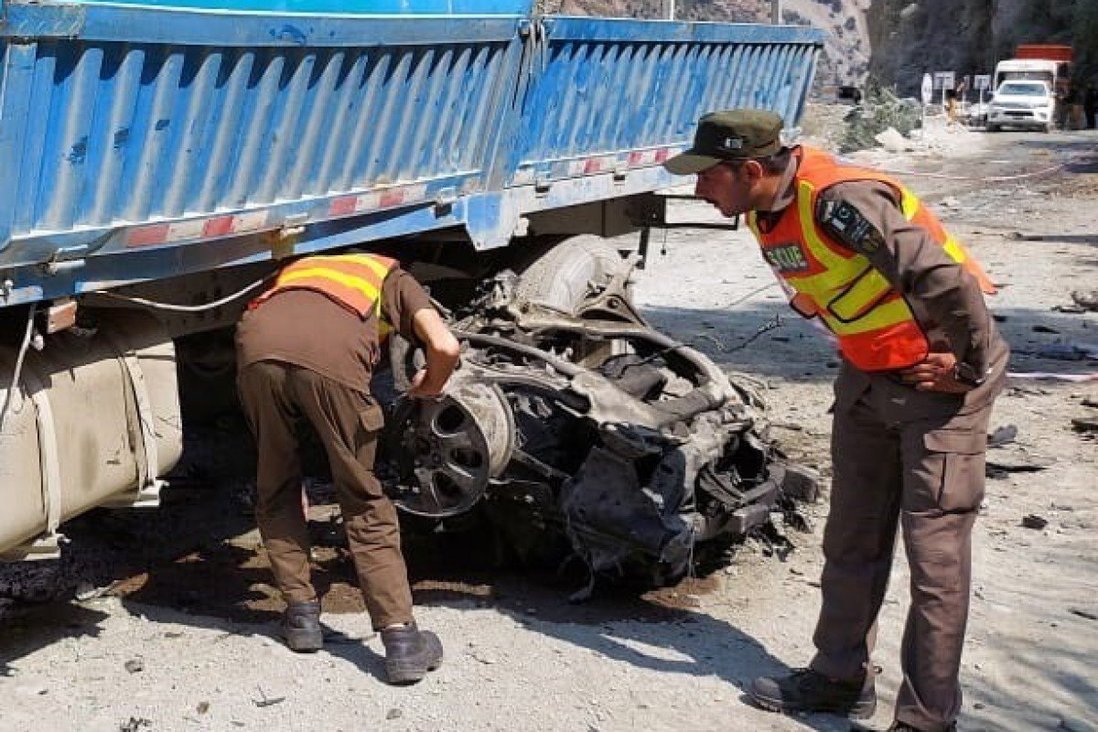 Foreign Minister Shah Mahmood Qureshi on Thursday told his Chinese counterpart that initial investigation into the bus tragedy near Dasu hydropower project in the Kohistan district of Khyber Pakhtunkhwa was not a result of  uprise of terrorists and terror activity in the area, according to a statement on China’s foreign ministry website.

Qureshi met Chinese foreign minister, Wang Yi, on the sidelines of the Shanghai Cooperation Organisation-Council of Foreign Ministers in Dushanbe on Wednesday. In the meeting it was stated that Yi stressed the immediate arrest of and severe punishment for insurgents involved in this case and the incident was a terrorist attack.

Qureshi, however, said the initial probe showed that the incident was not a terrorist attack. “Qureshi stated that said preliminary investigation shows that it’s an accident and no trace of terrorist attacks and activity  has been found,” the statement added.

The released statement further revealed that Yi urged for an investigation into the incident and told Qureshi that “the Chinese side is shocked by the serious Chinese casualties in Pakistan, hoping that the Pakistani side could quickly find out its cause, and reasons of the very incident, conduct rescue and treatment work at all costs, deal with the aftermath in time, and prevent similar incidents from happening again”.

The statement further quoted the Chinese foreign minister as saying that if the incident was “a terrorist attack, the criminals must be immediately arrested and severely punished”.

“Lessons should be learned from the incident, and the security measures for China-Pakistan cooperation projects should be further strengthened to ensure the safe and smooth operation of all projects,” he stressed.

Qureshi said China was Pakistan’s “most important friend and most reliable partner, and China’s loss is Pakistan’s loss,” according to the statement.

“Pakistan will spare no effort to rescue and treat the wounded, thoroughly investigate the truth of the incident, lose no time in sharing the progress of the investigation with China, and do its utmost to ensure the safety of Chinese personnel in Pakistan,” the statement quoted him as saying.

Thirteen people, including nine Chinese nationals, two personnel of the Frontier Constabulary (FC) and two locals, were killed and 28 others sustained injuries when a coach carrying them to an under-construction tunnel site of the 4,300-megawatt Dasu hydropower project fell into a ravine in the Upper Kohistan area after an explosion on Wednesday.

According to eyewitnesses, three vehicles were on their way to the Dasu dam site in a convoy after picking up Chinese labourers in the morning from Barseen camp — some eight kilometres from Dasu district headquarters of Upper Kohistan — via the Karakoram Highway when the blast occurred.

Sources privy to the investigation said a Chinese national was missing and a search for his whereabouts was under way.

“After the explosion, the coach fell into the riverside but the two other vehicles, a coaster and a jeep, remained safe in the incident,” one of the eyewitnesses said.

There were conflicting reports about the cause of the tragic incident.

Pakistan’s Foreign Office (FO) said “leakage of gas” caused by a “mechanical failure” resulted in the blast in the bus after which it plunged into the river side of the road. However, Chinese Foreign Ministry spokesman Zhao Lijian had termed the incident a “bombing”.

The official statement issued by the Chinese embassy said the bus was “hit by blast on its way to the construction site”. The statement did not elaborate on the cause of the blast, but it advised the Chinese living in Pakistan to “stay on alert, pay close attention to the local security situation, strengthen security protection, take strict precautions, and stop going out unless necessary”.