*Prime Minister Imran Khan on Thursday said peace in Afghanistan is imperative for the region, while delivering at the business forum. 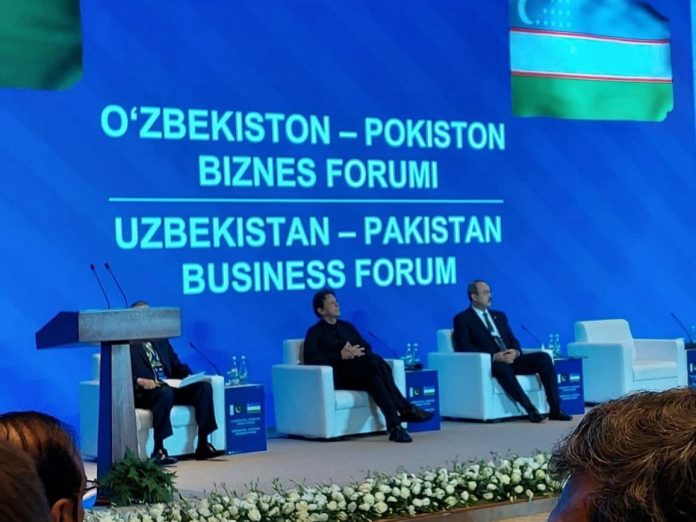 TASHKENT: Imran Khan on Thursday said Pakistan’s connectivity with Uzbekistan in trade and bilateral spheres would open up new avenues of prosperity in the region.

“Pakistan has immense potential to connect Central Asia with rest of the world and become a hub of trade,” the prime minister said in his address at the Uzbekistan-Pakistan Business Forum on ‘Central and South Asia 2021: Regional Connectivity Challenges and Opportunities’, in the Uzbek capital.

Imran Khan assured the businessmen and traders of Uzbekistan that Pakistan would extend them every possible facilitation in promotion of trade.

“I want to assure the business community of Uzbekistan that this relationship is just the beginning of the journey of development and prosperity,” he said.

The prime minister said the railway project among Pakistan, Uzbekistan and Afghanistan would prove to be a revolution of development and stressed that to exploit the region’s potential, peace and security in the neighbourhood was essential.

On the situation in Afghanistan, he said peace in the war-torn country was important to ensure materialization of development projects in Central Asia.

“Pakistan is keen for peace in Afghanistan and considers it vital for trade connectivity among the regional countries,” he said, adding that such trade linkages helped in raising the living standards of the citizens.

Imran Khan referred to the cooperation among the neighbouring countries of the European Union, that focused on bilateral trade arrangements for the benefit of their people.

He hoped that with the support and will of the regional States, the situation in Afghanistan would lead to improvement.

The prime minister said Pakistan and Uzbekistan enjoyed relations rooted in common faith, culture and history and offered a unique dimension to the two nations to explore each other in diverse areas.

Imran Khan left for a two-day visit to Uzbekistan on Thursday at the invitation of Uzbek President Shavkat Mirziyoyev  accompanied by Foreign Minister Shah Mahmood Qureshi, some federal ministers and a delegation of businessmen.

“Talks between the two leaders will cover the entire gamut of bilateral relations, with a particular focus on trade, economic cooperation, and connectivity,” stated Radio Pakistan.

The two sides are expected to sign various MoUs and agreements in various fields. During his stay in the country, the prime minister will address the first-ever Pakistan-Uzbekistan Business Forum.

Prime Minister’s Adviser on Trade Razak Dawood is already in Tashkent along with a delegation comprising 135 business leaders from the country to discuss trade and investment opportunities between Pakistan and Uzbekistan.