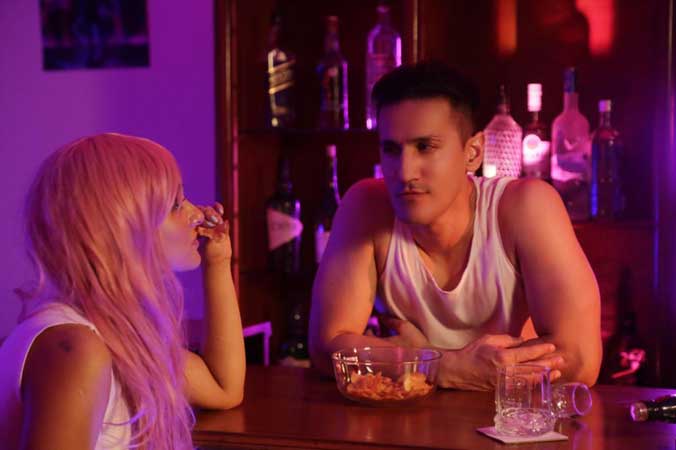 Electronic musician Faraz Haider, has released his latest music video for a hypnotic and hard-hitting track “Don’t You Dare.” Brimming with Haider’s signature style and beats, Don’t You Dare is the fourth music video to be released from his album, Playroom.

Featuring a picturesque neon club setting, the video shows Haider bartending and engaged in some flirty eye contact with the female lead. We see things progressing between the two, with dancing, teasing, and finally leading up to a private room. Keeping the fun alive with a hint of noir to it, the video ends with a killer plot twist, leaving many viewers stunned, wondering what just happened and rushing to re-watch in hopes of finding some answers.

Lyrically, Don’t You Dare is one track off the album that talks about refraining from falling in love. Similarly, the other tracks on the album also speak of Haider’s own experiences with events as such. “We took elements that would align with the story and the previous music videos. The inspiration for the album, however, is derived from my personal life, my own experiences and the lessons I’ve learned along the way. The narrative is driven by my own views on relationships, marriage, and love. Whatever I’m trying to show is also embedded in the lyrics and is present in the whole feel of the album,” he stated.

“The album as a whole and the film’s subject matter has a lot to do with desires and fantasies. The way I see it, Playroom is like a room where no one will judge you, and you can do whatever you want. You will be in control of your narrative. It evolved to a point where it felt like a simulation, especially when we’re living inside an encrypted world, it all felt too close to what I was doing,” Haider shared.

This music video of Don’t You Dare builds on the story of three previous music videos namely Feels, Serum of Love, come to Me and paves the way for much more to come from Haider this year. Already having mastered the art of moving fluidly from genre to genre, the musician is now all geared up to branch towards a visual treat with the highly anticipated release of his digital short film. Inspired by the likes of Black Mirror, Cyberpunk, and sci-fi-fantastical films Haider grew up watching, Playroom’s digital film will finally show us how the story unfolds.

Hailing from Karachi, Faraz Haider is a singer, music producer, and filmmaker known for his passion for music and candid storytelling. Kickstarting his EDM skillset at the tender age of 13, Faraz went on to explore various genres during his teens before finally joining the band Andher in early 2000s. In 2010, we saw Faraz launch his solo career with an industrial rock sound in his debut album, Andher. The album was soon followed by another album which was released online and mostly consisted of Faraz’s signature electronic sound and high-pitched vocals. Thereafter, Faraz dabbled into multiple professions – be it a creative manager for a hit radio station or a content developer at a buzzing ad agency – but found his way back to his one true passion ie music. A self-taught musician and filmmaker in all its essence, Faraz took a leap of faith with his third album Playroom, which demonstrates a massive shift in genres and his expertise in filmmaking. The fourth music video from the album, titled Don’t You Dare, is now out and his much-awaited digital film will be available for viewing pretty soon.

Don’t You Dare is available for streaming wherever you stream music and be sure to check out the new music video.