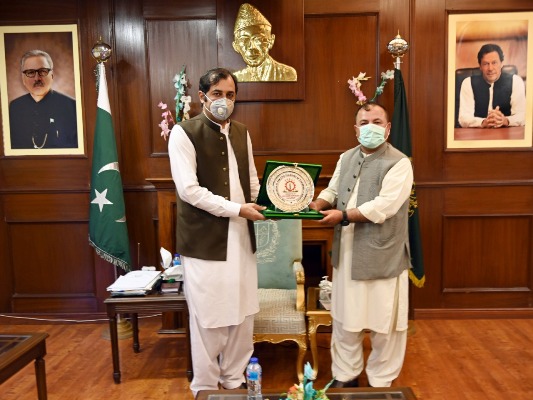 They discussed a wide range of issues, including the development of industry and trade, investment, and strengthening ties between the business community and the GB government.

On this occasion, it was also agreed to work together for the development of Gilgit-Baltistan, promotion of investment and elimination of unemployment, said a press release issued here.

During the meeting, the CM said that Gilgit-Baltistan was rich in natural beauty, natural resources and also gateway of grand CPEC project.

He said there were vast investment opportunities in various sectors including agriculture, adding Gilgit-Baltistan was a tax free region which having capacity of business of worth billions of rupees.

The CM said domestic and foreign investors should take full advantage of these opportunities and added that the success of the tourism sector lied in improving it through investment, which was not possible without the cooperation of the private sector.

To facilitate the private sector, the government was creating an environment in which investors could invest and ensure a fair and secure return.

He said that keeping in view the geographical conditions of the region, the government would encourage small and medium scale investors.

The CM said that the government was taking all possible steps to provide all kinds of relief to traders and industrialists.

Muhammad Khalid invited the entire team of FPCCI to visit Gilgit-Baltistan and asked them to come, see which sector needed more attention and promote investment and end unemployment.

He invites the business community to work with the government of Gilgit-Baltistan for the development of the region.
On the occasion, Chairman, FPCCI, Capital Office, Qurban Ali thanked the CM Gilgit-Baltistan and said that the FPCCI had played its full role in the development of Pakistan.
The Chairman FPCCI is in constant touch with domestic and foreign investors to promote investment in the GB .

He said that “we have also apprised many foreign ambassadors, investors, government and chamber officials about the importance of Gilgit-Baltistan and encouraged them to invest there,which will soon show positive results.

He said that tourism was the only sector in Gilgit-Baltistan which could be given industrial status.

He said that development of three or four sectors in the region could play role for uplift of Gilgit-Baltistan.

In order to promote tourism in Gilgit-Baltistan, it is necessary to ensure the safety of tourist destinations as well as provide better roads and transport facilities for access to them.

Qurban said that the establishment of international airports in the tourist areas of Gilgit-Baltistan and the launch of direct flights from abroad were essential for the promoting tourism so that the tourists coming from abroad could come to this place directly from their own country.

The Gilgit-Baltistan government should take steps in collaboration with the federal government Qurban Ali said and invited Gilgit-Baltistan Minister Muhammad Khalid Khurshid to visit FPCCI adding an international investment conference would be held soon in Islamabad and Gilgit-Biltistan.