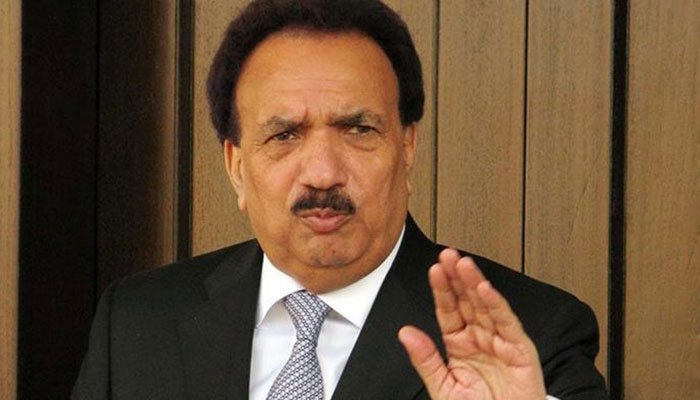 ISLAMABAD: Former Interior Minister and Chairman Institute of Research and Reforms (IRR) Senator Rehman Malik has urged the government to call a grand moot in Pakistan on Afghan peace inviting representatives of Afghan government, Taliban, and all other factions to set up an agreed interim government.

Malik further said that Afghanistan has now landed in the worst situation because of the non-compromising attitude by both, the Taliban and the government, whereas the USA also did not play a decisive role to install an interim government before the withdrawal and to avoid the possibility of bloodshed and civil war. Malik said that although Afghanistan was not involved in the 9/11 attack, the USA still attacked it and Pakistan was forced to associate with this resultless war on terror which costed heavily.

He said that in this war on terror, Pakistan sacrificed the lives of more than 70,000 troops and civilians with huge devastation to its economy and basic infrastructure.

Rehman Malik further said that by each day Afghanistan is going into the hands of Taliban and it is surprising that even they could capture provinces easily where they did not have a stronghold. He said that Taliban are marching towards Kabul with the intent of ruling it and history will be witnessing the second rule of the Taliban. However, they will make mistakes if follow the line of action of India as India has set a big trap for the Taliban to use them in the neighbourhood, he added.

Former Interior Minister Senator Rehman Malik said that Deputy Spokesman for the Ministry of Defence had said that Indian ambassador met with the Secretary of Defence Bismillah Mohammadi and confirmed that India was assisting the Afghan defence and security forces. But, same time India has also engaged Taliban in dialogue playing double.

He said that Iran had arranged two days of negotiations between the Taliban delegation and the Afghan political delegation wherein both sides agreed that war was not the answer to Afghanistan’s problem. He said that Indian Foreign Minister Dr S Jaishankar visit to Russia with a one-point agenda of ‘Taliban in Afghanistan’ and a stopover in Tehran couldn’t be ignored.

Senator Rehman Malik noted that foreign troops are pulling out of Afghanistan at an accelerated pace, the peace and reconciliation process in Afghanistan is under attack, armed conflicts and terrorist activities are becoming more frequent, and the security and stability of Afghanistan and the region are facing new challenges. He said that unfortunately, Afghanistan will remain in focus internationally because of the Taliban takeover and President Ashraf Ghani will have no choice to submit to the advancing Taliban or to flee away from the capital unless he gets American or Indian protection.

Senator Rehman Malik said that US withdrawal without a strategy will prove a big mistake soon. He said that South Asia was already sitting on a volcano because of the US-China cold war which is visible in South Asia and if the Afghan political bomb bursts, it will splinter in neighborhood. He said that Pakistan must not forget that there is a troika’s deep understanding of the US, Israel, and India.