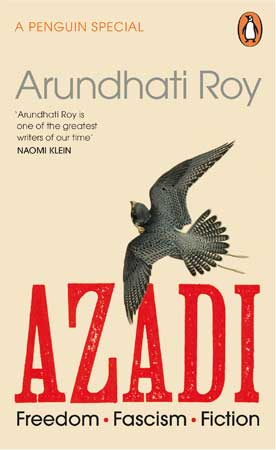 Azadi: Freedom, Fascism & Fiction is the latest book, published on September 3, 2020, by outspoken and Booker winning author of The God of Small Things, Arundhati Roy.

Arundhati Roy is an Indian writer. She was born in Shillong, Meghalaya, India, to Mary Roy, a Malayali Syrian Christian women’s rights activist from Kerala and Rajib Roy, a Bengali Hindu tea plantation manager from Calcutta.

Roy is also a political activist involved in human rights and environmental causes. She with enviable temerity speaks about social plights ranging from Kashmir to Dalits and all those squelched folks whose torments invariably slide unnoticed. Her non-fiction career jumpstarted when she penned her maiden political piece, to wit The end of imagination, when India tested her nuclear arsenals, to wary the world of the perilous imbroglio burgeoning in South Asia. Since then, she is writing political essays and fiction conterminously. She notes, “I have never felt that my fiction and non-fiction were warring factions battling for suzerainty.”

Many people have raised gratuitous eyebrows over her political essays and have coaxed her to perpetuate her fiction writing career inasmuch as that is what her potentials must be invested in. But she pooh-poohs that. This predicament was settled for her when she receiver a hand written letter from John Berger writing: ” Your fiction and non-fiction – they walk you around the world like your two legs.”

As humanity reels from the racking toll of a deleterious and mutating pathogen, Roy cruises us to her world of inimitable and electrifying essays. There are a total of nine essays in the collection each overlapping and coeval with other. The tone is prescient and telling. Her voice is always outstanding.

The first essay is named after a line of Pablo Neruda: In What Language Does Rain Fall Over Tormented Cities? This begins with her concomitant experiences of her first novel The God of Small Things back in days of 1997. The chapter limpidly with intensity answers all those jarring questions which are tinged with sardonic commentaries. Language does not even matter an iota for inking ideas into paper reifying it more and more.

But many people have problems with her adoption of English as her writing vehicle. Many people have said, as she mentions in her first chapter, ” Has any writer ever written a masterpiece in an alien language? In a language other than his mother tongue? ” This snarky question was asked to her in a book reading ceremony in Kolkata. She answers this maintaining plenary equanimity: Nabokov.

She unabashedly talks about an array of subjects ranging from her first semi-autobiographical novel to the setting of the novel from telluric texture of the novel synchronous with her birth place Kerala to Hindu nationalism which is spreading like a virus with an unapologetic gesture of hubris. Down the same chapter she extensively brings to fore the backdrop of her second novel, The ministry of utmost happiness.

How characters limp and with eerie footsteps career into the life of a writer and whisper jolly frighteningly all those clandestine secrets of a character is truly felt in this portion. The most morose time is when Anjum, the hermaphrodite protagonist of the novel, visits Gujrath to shrine of celebrated poet of seventeenth century and finds it razed to the ground. This is the longest chapter of the book. But also, the cheerful and exquisite one.

The next few chapters are premised upon the India-Pakistan relationship after the Pulwama suicide attack on Indian troops killing all but fourty personnel in Kashmir and following airstrike of Indian air force over Balakot a town in Pakistan. Roy writes: ” On 14 February 2019 a convoy of 25,00 paramilitary soldiers was attacked in Pulwama by Adil Ahmed Dar, a twenty-year old Kashmiri suicide bomber who, i has veen declared, belonged to the Jaish-e-Mohammad. The attack, which killed at least forty men, was yet another hideous chapter in the unfolding tragedy of Kashmir.” But the question is why bombing? She answers this question quite pithily: ” There are hundreds, if not thousands, of young men in the Kashmir Valley like Adil Ahmed Dar who have been born into war, who have seen such horror that they become inured to fear and are willing to sacrifice their lives for freedom.”

This gruesome attack futher exacerbated the Indo-Pak relations and became the last straw. All the same, focus in these chapters is on Narendra Modi’s designs and shibboleths to harness this situation to his benefit for winning the awaited election. And he does so, as Roy says and also secures a landslide win in the elections by even a larger margin.

To her chagrin, this is the same Modi who countenanced a well-thought-out pogrom of Muslims in Gujrath in 2002 when Modi was the Chief minister of the state. The Hindus went on a killing spree when an act of arson was committed on a Hindu pilgrimage train in Gujrath. The onus was laid on Muslim community’s shoulders and were held responsible. But the dismaying point is that the State government was in limbo when the riots and pogroms were going on. People were being killed, women raped and properties incinerated but no one helped for a long period. This is the spell when Anjum visits Gujrath for Wali Dakhani’s shrine and finds everything hellish.

When it comes to Kashmir, Roy’s heart cries. She is the most outspoken and audacious writer who unremittingly writes about the State committed atrocities in Kashmir. Almost in all essays she mentions the sorry story of Kashmir where everything hangs in morosity. On 5 August 2019 the Indian government unilaterally breached the fundamental conditions of the instrument of Accession by which the former princely State of Jammu and Kashmir agreed to become part of India in 1947. This divested Kashmir of statehood and its special status — which included its right to have its own constitution and its own flag.

This ipso facto meant the simultaneous abrogation of Article 35A of Indian Constitution, which secured the erstwhile state’s residents the rights and privileges that made them stewards of their own territory. By midnight of 4 August internet was suspended and phones went dead. Schools and markets were shut down. As Roy mentions, more than 4,000 people were soon arrested. That included politicians, businessmen, lawyers, rights activists, local traders, students, and three former chief ministers. Hence, entire Kashmir was under siege and beleaguered; the political crème de la crème incarcerated.

After a few months of this flagrant abrogation, the Citizenship Amendment Bill was passed in Parliament on 11 December 2019, becoming the Citizenship Amendment Act. This bill was highly discriminatory and invidious. The Muslim community was at the receiving end of this Act. This act promulgated that all non-Muslim minorities including Hindus, Christian and Sikhs can apply for citizenship in India. Muslim of India remonstrated this Act and thronged onto streets to inveigh this balefulness. But to no avail and in return Muslims were brutally maimed, killed and beaten to pulp. Roy notes, ” CAA, which offers a fast-track route to citizenship for non-Muslim minorities, is blatantly unconstitutional and blatantly anti-Muslim.”

In the similar fashion the NRC, National register or citizen, was promulgated in North-eastern province of Assam bordering with Bangladesh. NRC demanded written and documentary proof from refugees for application of citizenship. This was again invidious as most of people in Assam were unlettered and had no inkling of documents. Once again Muslim-discriminatory rules and regulations were invoked to rack them. Roy notes, ” The sole purpose of the NRP-NRC-CAA is to destabilize and divide people not just in India but across the whole subcontinent.” The refugees in Assam were called by the henchmen of Modi as “Bangladeshi termites.” This slur will only translate into unimaginable acrimony and hatred nothing more than that.

Hannah Arendt, German born American political theorist, says, “Citizenship gives you the right to have rights.” In modern dispensation of nation states, everything banks on citizenship; when you are eviscerated of this privilege, that suggests you are a nobody. Similarly, the 2 million people – Hindus, Muslims, Dalits and Adivasis who are awaiting privilege of citizenship cannot exercise anything of significance like to vote someone of choice, to buy properties and carry out several other modern activities. A democratic country is bound to bring an air of justice and level playing field in every realm of State. Discriminatory actions smack of dictatorial and tyrannical siege.

The last chapter is about the Pandemic, viz. The Pandemic is a Portal. Roy surfaces India’s bleak story of Covid-19. How all and sundry, particularly the blue-collars, grappled with this virus and suffered unimaginable haemorrhage due to sudden and abrupt lockdown imposed by Modi lead government. Everything years for equanimity and years to go back to the pre-pandemic halcyon days. Nonetheless, Roy retorts that we should be yearning for what we call normalcy which in effect is not. Rather the pandemic should be envisaged as a portal through which we should enter into a new normalcy which should characterize us much human, lovely and effervescent. Pandemic has ruptured our normalcy and that is a given and now the virus should not be dealt as a threat out and out but as Roy notes, ” it offers us a chance to rethink the doomsday machine we have built for ourselves.” This is the time we should reckon with what so far; we have arrived at. Roy bids us a farewell with these lines, ” Historically, Pandemics have forced humans to break with the past and imagine the world anew. This one is no different. It is a portal, a gateway between one world and the next.”

The article has been written and contributed by Shahab Akram who is a student at Quaid-e-Azam University based in Islamabad. He Tweets at @shahabakram6 and can be reached at shahabakram0852@gmail.com