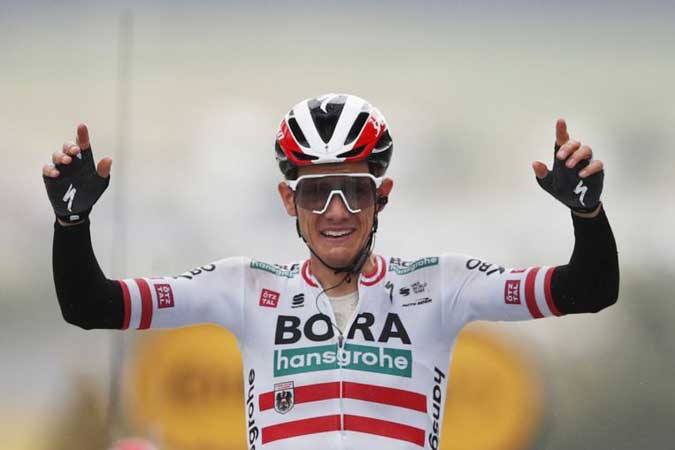 SAINT-GAUDENS: Austrian Patrick Konrad won a hilly stage 16 of the Tour de France on Tuesday after joining an early breakaway and then attacking solo from 38km out on a rainy run through the Pyrenees. Overall leader Tadej Pogacar and his general classification rivals rode the 169km course at a gentle pace and were trailing the 29-year-old Bora-Hansgrohe man by some 14 minutes on an unseasonably cold run with two major mountain stages coming up over the next two days. As the peloton came into the final kilometres an elite clique of 15 riders broke off the front with Slovenian Pogacar of UAE, EF man Rogoberto Uran, Jumbo’s Jonas Vingegaard and Ineos rider Richard Carapaz all finishing in the same time. On an overcast day in the Pyrenees the peloton embarked from Pas de la Casa in the Principality of Andorra where the roads appeared even narrower with the wet, overhanging foliage. Green jersey Mark Cavendish and a ten-man grupetto of stragglers fell off the back but made it home within the time cut.