* Lawmaker says delta variant makes up half of cases 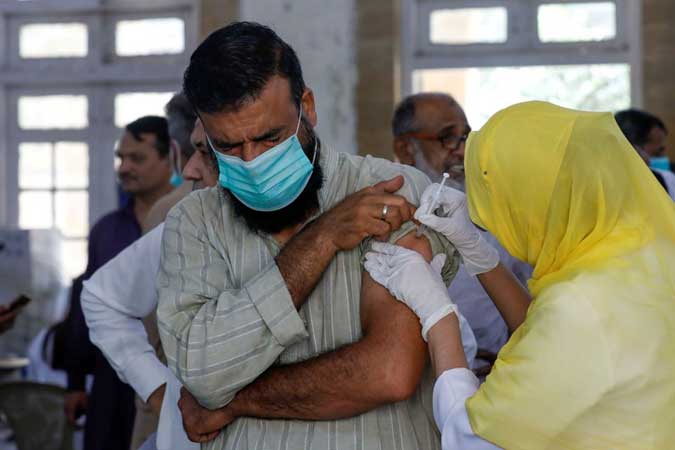 The coronavirus claimed another 21 lives in the country during the last twenty-four hours, pushing the national death tally to 22,618, said the National Command and Operation Centre (NCOC) on Tuesday.

According to the NCOC data, the country reported 1,590 new cases after 43,790 tests were conducted on July 12. The positivity rate was recorded at 3.63 percent. The total active Covid-19 cases in Pakistan are currently 39,644.

According to NCOC’s figures, the total number of cases has reached 976,867. At least 914,605 people have recovered so far across Pakistan, making it a significant count.

At least 200 new coronavirus cases were recorded in Punjab during the past 24 hours, taking the provincial tally to 348,509.

According to the Punjab Primary and Secondary Health Care Department, at least 10 more patients succumbed to the pandemic as the total death count reached 10,832. The department added that at least 328,969 patients had recovered from the deadly virus as of yet, with 131 people recovered in the past 24 hours. Sindh reported at least 1,201 new coronavirus cases during the last 24 hours, taking the tally to 349,569. According to Chief Minister Syed Murad Ali Shah, eight more patients succumbed to the deadly virus as the death toll reached 5,621. He further said that 535 more patients recovered overnight, taking the total to 318,376.

At least six more patients died from Covid-19 in Khyber Pakhtunkhwa during the last 24 hours, taking the death toll to 4,371. According to health officials, 117 new cases were reported in the province as the tally jumped to 139,710. As many as 150 patients recovered overnight, taking the total to 133,522.

Meanwhile, Federal Parliamentary Health Secretary Dr Nausheen Hamid said on Tuesday the delta variant of the coronavirus is now making up a whopping 50 percent of the total infections in Pakistan. She said the Covid-19 vaccines that Pakistan is administering are effective against the delta variant.

She highlighted that no vaccine in the world is 100 percent effective against the delta variant; however, if a person gets the jab, the virus will not affect his/her health badly.

Meanwhile, at least 35 cases of Covid-19’s delta variant, earlier referred to as the Indian variant, have surfaced in Karachi since the month of June, the Sindh Health Department confirmed on Tuesday.

“From June till now, 35 verified cases of the Delta variant have been found in selected covid positive samples. The individuals who were carrying this variant showed extreme symptoms of covid,” said Provincial Minister for Health and Population Welfare Dr Azra Pechuho.

She further added that a family of five in Lyari tested positive for the Delta variant and one of them is under treatment currently. “During this month, there have been 18 cases of the Delta variant in Karachi,” she said. “All are advised to restrict their movement unless necessary and to strictly follow all SOPs in order to curb the spread of this infection.” Pechuho further advised the masses to wear a mask when outdoors or in public places as she said the world saw the effects of the Delta variant in India. “Citizens must exercise caution and act responsibly”. she urged.